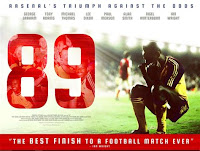 I’m sure many important things happened in the world during the year 1989. If you are an Arsenal Football Club supporter, though, it’s highly likely one of the things you’d remember most out of that year was Arsenal winning the English title (note it wasn’t called The English Premier League back then). Not necessarily it winning the title, but rather how it won the title.
It is all historical facts so I see no reason to avoid bloopers here. That year, Liverpool were the main candidates for winning the title; they were still that peak Liverpool team, that won so many English and European titles. As it happened, things narrowed down to the very last match of the season, a game that featured a top spot Liverpool hosting second place and unlikely hero Arsenal at home (as in, at Liverpool). If the game ends up with a win for the local team, or a draw for that matter, Liverpool wins the championship; for Arsenal to win it, it had to beat Liverpool. What are the chances of that happening?
As it turned out, in that year, 89, things had to wait till the 89th minute. The winner of the title was determined by virtually the last pass of the match. In other words, a climax could not be more climatic than that. In other other words, not many real life events can boast to having such a climax; when they do happen, they tend to happen in sports. Which is probably a good explanation as to why sports are so popular.
89, the film/documentary we are discussing here, tries to tell the Arsenal story of that year and specifically that deciding match. It tries to milk that climatic moment for all its worth. The question is, does it do a good enough job? Will spectators get their sports orgasm watching 89, that once in a lifetime (and probably even less) event that Arsenal fans lived through in 1989?
The approach taken by 89 is to use stock footage coupled and effectively have it narrated by the Arsenal players of the time, whose interviews make up the bulk of the film. Structure wise, 89 tells the story of how Arsenal got to that year, how Arsenal did through the year, and - eventually - how Arsenal traversed that decisive match. It’s all Arsenal from start to finish, no other view point is represented.
When the credits rolled it the end, I wasn’t surprised to see that the producers of 89 are ex Arsenal people (89 team members, to be specific). It is thus no wonder the end result ended up the way it did. Which brings us to the question of who, on the side of film viewers, would find 89 appealing?
It can be argued that this is a documentary that should appeal to football fans at large. It does shed some light on the history of the game during what, to modern eyes, seems like a completely different era (despite the fact not that much time passed): just note how Arsenal’s manager at the time discusses the way he would identify potential candidates to the squad compared to the scouting operations available today, when everyone seems to know everyone intimately through social media. Or simply the fact that most, if not all, of Arsenal’s players at the time were English (or at least UK citizens). It’s like a totally different planet.
On the other hand, it is also clear 89 was designed by Arsenal folk for Arsenal folk. The tension it builds up would probably fail to trigger the emotional response it seeks to create in the hearts of non Arsenal supporters. I guess what I’m trying to say is, with a product (and I emphasise the word “product”) that is so biased and one sided, it is hard to refer to 89 as a proper documentary as opposed to a pro Arsenal propaganda tool (something I have no objection to whatsoever when it comes to football and sports in general).
Overall: 3 out of 5 crabs, but do beware of its limited appeal aspects.
Note: If you are after another take on that great moment from 1989, consider watching the romantic comedy Fever Pitch (starring a then not as yet familiar Colin Firth).
Posted by Moshe Reuveni at 9/09/2018 08:44:00 pm
Email ThisBlogThis!Share to TwitterShare to FacebookShare to Pinterest
Labels: Film