Yes, I know, and I am well ashamed of the fact this blog has not been properly maintained lately. I still take notes on the movies and books I would like to review here, for the simple fact I consider taking such notes an integral part of the experience they offer; the problem is, editing those notes into a publishable post that wouldn’t put my editorial standards into too much shame takes time. And time is by far the my precious resource.
That, however, does not mean I can not or should not summarise the year that was and point at my crabbiest favourites for the 11th time in this blog’s 11th years of existence. So here goes:

As has been noted in previous years, genuinely good movies are hard to come by. It’s not that they do not exist; I think their rarity in my life is a result of three factors:
1. I do not have as much time for movies as I used to have. Watching good movies comes as a result of experimenting with materials, often wasting one’s time on many duds on the way to that shining star. Alas, I can rarely afford such luxuries anymore.
2. A lot of my movie watching time is consumed by “must watch” events, like the latest Star Wars flick. While these might be must watch movies due to the marketing hype, these movies also tend to be rather ordinary.
3. I will also admit that I often seek out the ordinary Hollywood production line type of a film just so I can vege out of this world’s troubles. These specimen do the job in that particular department, but at the same time it also means I did not make good use of my time given my life’s goal of expanding my horizons.
With these caveats in mind, I will point out to the movie I probably liked the most this year, The Nice Guys. I liked it for several reasons: it is a well made movie with fine actors, including some personal favourites; it is a pretty entertaining movie; it is a smart movie in the sense that it is a allegory about film making inside of a film that is inside of the film; and it follows on another great movie that often does not receives the acknowledgements that it is due for, Kiss Kiss Bang Bang.

Two books have dominated my reading this year, both coming from the Israeli philosopher (at least in that old Greek sense of the word) Yuval Noah Harari. The first is a few years old, Sapiens, and discusses the history of humans and what makes us special. The second, the newly published Homo Deus, attempts to look at the future of humanity through the lens of history. That is to say, given where we came from and what we have achieved, have a guess at where we will be going. Agree or disagree with Harari’s analysis, both books are great triggers for many a follow up thought, and thus both books are my winners for this year. My clear winners.

Homo Deus is a particular achievement in the field of raising thoughts. Harari agrees that prophecy is for the foolish and does not expect his to turn out right. The point, however, is that in looking backwards in order to look forwards he manages to provide a thorough, or as thorough as they come, multidisciplinary analysis of the future. And doing so is such a readable, pleasurable, form is the best achievement in writing that I managed to bump into this year.

Best music:
With Bowie getting the nod last year, it seems like I’m on a trend of acknowledging recently deceased artists with an illustrious career behind them. But hey.
So this year’s recently deceased musician to leave the scene with a bang is Leonard Cohen, and he did so with a great album - You Want It Darker. An album that feels as if he knew he was bidding this world goodbye.

What is probably worth noting is that, unlike Bowie, I was never a big Leonard Cohen fan. It was his previous album from 2014, Popular Problems, that captivated me in Cohen’s name for the very first time. A feat I attribute to lyrics such as

With those words, Cohen has summarised my main take from the experience of parenthood.

As much as the role of movies is declining in my life, the role of quality TV is on the rise. Artistic movies might be on the decline due to commercialisation, but at the same time artistic TV seems on the rise through the power of the Internet.
With that in mind, I would like to offer you my two winners for the year.
First is yet another Scandinavian small screen adaptation, Kenneth Branagh’s adaptation of Wallander (which has been running on and off for many years now, but this year reached its satisfying conclusion). Not only does Wallander supply good criminal detective stories set in an alluring Sweden (though, weirdly, an English speaking Sweden), it also did so while involving the viewer in the existential debates that Detective Wallander has to grapple with through his work/life balance. Although extreme, these thoughts probably plague all thinking humans as they grow older, and as such are worth proper examination. As well as celebration.

The second TV series I would like to commend is not half as good on philosophical grounds, but it is still a breakthrough. The Expanse is a science fiction TV series about a future when humankind grew to populate the solar system (but is at the earlier stages of doing so). It is also probably the first properly made (production values wise) hardcore science fiction of the Asimov grade I ever had the pleasure of bumping into, visually. If, like me, you are a fan of classic science fiction, I warmly urge you towards The Expanse’s direction.

Best video games:
If there is one area I feel I had made substantial progress in and which has made substantial progress into my life this year, that would be the area of video gaming. The bulk of this progress can be attributed to a single website, Digitally Downloaded, and most of the credit for this progress should go to one person, the editor of Digitally Downloaded, Matt Sainsbury. [Also worth noting is the fact I never met Matt Sainsbury in person. All of our interactions have been Internet based, which - as far as I am concerned - is all the evidence I need for the Internet’s virtual world being an integral part of what we normally refer to as IRL - In Real Life.]
To put it into a single paragraph, I started this year dismayed with the world of video gaming being limited to sequel upon sequel of trashy games that contribute nothing to humanity’s perceptions of this world (at least through the eyes of yours truly). Along came Digitally Downloaded, a website that looks at games as works of art, and achieved two things. First, it demonstrated to me that I am not the only one who seeks an expansion to one’s horizons through video games, which I consider the cutting edge of modern day art. And second, it pointed me towards this whole galaxy of games that tend to slip under the radar of big marketing, games that are designed for people like me and are often made by people like me. Lo and behold, with one fell swoop I found myself living in a great universe!
With that long introduction in mind, I would like to share with you the biggest games in my life this past year. Not surprisingly, these are both games played for mobile platforms, because one does not have much time to sit in front of one’s TV or computer nowadays; gaming happens in between other, mandatory parts of lie, but it is the gaming which often makes those other parts of life worth living through. 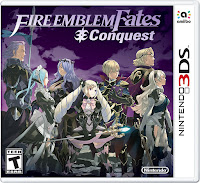 As far as gaming hours are concerned, Fire Emblem has robbed the bulk of my gaming time off me. First through its very charming mobile incarnation of Fire Emblem Heroes on my iPad, but foremost through Fire Emblem Fates on the Nintendo 3DS. Narrative wise, I consider the latter one of the best if not the best crafted games ever: the tale of two symmetric royal families duelling with one another, one seemingly good while the other seemingly evil, provides a much to learn from analogy to all earthly conflict. Split into three different games, allowing you to take the “good”, “bad” or “neutral” sides, you quickly learn that things are not what they seem; that, for example, the bad isn’t made of evil people but rather of people just like you, and the good isn’t made entirely of infallible people. If I have to choose one of the three, I would urge you to go for Conquest, the hardest (but never too hard, really) of the three episodes and - more importantly - the one where you take the "baddie" side.
There is much, much, more to say about the game. Instead of repeating others’ words, though, I will point you at this interesting analysis of Fates.

My second gaming pick of the year is a more personal affair. Human Resource Machine on mobile is a game that is not a game in the classic entertainment sense of the word; it has you performing Assembly level programming on a CPU (but does it under the pretence of a company HR department). I don’t know about you, but in my youth I did plenty such Assembler programming on my then computer; I even wrote my own compiler.
Much water went down the river since, with much mud and sewer, too. Looking back at those days of glorious programming, I cannot avoid thinking of all the things I could have become if I pushed onwards with my then passion. I cannot avoid the feeling of missed opportunities. I cannot escape the conclusion that, in more than one way, through this and then that, I have wasted my life instead of answering its true calling.
And if that’s not an awesome return on investment for a game that cost me a dollar (I bought it when it was on discount), I don’t know what is.
Posted by Moshe Reuveni at 7/29/2017 01:53:00 pm No comments:
Email ThisBlogThis!Share to TwitterShare to FacebookShare to Pinterest
Labels: R-Wards
Newer Posts Older Posts Home
Subscribe to: Posts (Atom)