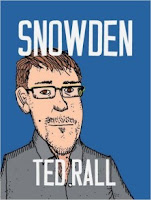 Lowdown: The Snowden story told through a ~200 page comic.
Review:
I don't know how you, book readers, do it. Reading a book, as opposed to an ebook, is shit! The lighting is bad, you have to hold the book open. You even need to physically flip through pages! Oy vey.
But I did make an exception for you for a book that stared me in the eye as I passed by my local public library: Snowden by Ted Rall (who, apparently, is a cartoonist for pretty big USA publications). Snowden the book is a comic book of a little more than 200 pages. At its end you will find two pages of closing off text as well as numerous pages offering citations for the points raised by the comic itself, with the point being that Snowden takes itself seriously.
The author's views are revealed on page 1: we are, he tells us, living the manifestation of Orwell's 1984 vision. I concur; you can tell why I made a sacrifice and chose to read this particular paper book. Snowden goes further, though, much further: readers are informed about some of Edward Snowden's biggest revelations.
Then the comic picks up on a new direction that represents the bulk of pages. That is, trying to figure out why it is that Edwards Snowden and no other came out to do what he had done and reveal this information to us. What does this say about Snowden? To answer that question, we get to explore Ed's personal history (where I got to learn he was (is still?) a libertarian - oy givald!).
I have to say it, I found myself identifying with Edward Snowden's personal journey. Not I am half as brave as he was, but rather on account of other similarities between us. Specifically, how we used to do the same things (video games, reading Ars Technica) and hold certain opinions that, upon being challenged by international travel and seeing the world with its different facets, we later changed.
If you care for the book's answer for the Snowden riddle, it is, and I quote, that Snowden had an "ideological awakening [while working] in an organisation that selects for conformism".
Then the book concludes with a discussion on whether those things that Snowden did were right or wrong. Perhaps because I'm not an American I do not even start to consider Edwards Snowden as a traitor, which leaves "hero" as the only option. Luckily for me, Rall provides ample evidence to show that, even for Americans, what Snowden did was an act of heroism of the best kind.
Overall:
A comic is, indeed, a fine way to tell the Snowden story in a meaningful yet entertaining way. I have been regarding Snowden as a hero since June 2013 and, as far as I am concerned, he is welcome to seek asylum at my home for as long as he requires. That invitation is now even warmer through me knowing more about Edward Snowden and his journey through this fine comic.
4 out of 5 crabs for Snowden the comic, and all the crabs in the world to public libraries, one of humanity's better institutions.
Posted by Moshe Reuveni at 8/21/2016 12:08:00 am
Email ThisBlogThis!Share to TwitterShare to FacebookShare to Pinterest
Labels: Comic