It is this blog's 10th birthday! Hooray! Who would have thought?
As I have done at each previous birthday, I get to put forward the things I've enjoyed the most this past year, some of which I have reviewed here and some that I haven't. As per the last birthday, I will add a note alerting of the fact I do not know how long I will be continuing this blog for; whatever purpose I thought it might have served when I started this adventure, things pretty much narrowed down to the fact my personal experience of movies and books is further enhanced by the need to analyse them for a review. Alas, when the vast majority of movies is somewhere down the manure-osphere, is there a point to dedicating brain cells and/or precious time to the analysis exercise?
With that philosophical question in mind I shall move over to noting the best this year had to offer. 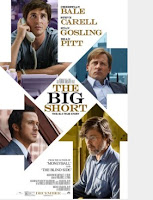 Best movie:
If there is any trend to take from the past decade, it is that movies have been "doing it to me" less and less over the past decade. Sure, Blu-ray with its technical prowess had its time under the sun, but nowadays I do not have much time anymore; it is hard to justify straight two hours in front of a screen, and it is even harder to do so when those two hours are mostly spent moaning at the trash Hollywood serves me up with.
With that in mind, there were two movies that did do it for me this year and they are definitely worth celebrating. The first was The Martian from Ridley Scott, an expertly made science fiction tale whose main fallacy lies in the fact we always knew Matt Damon was going to make it.
It is therefore the second of the pair that wins it for this year: The Big Short, an entertaining movie about finances that shows us all how one can make a documentary about the seemingly most boring subject ever and achieve an ever so entertaining [and educational] result. As such, The Big Short is a proper achievement in the art of film making.

Best book:
I never get to read as many books as I would like to, and this year I also didn't review as many books as I would like to either. I can, however, confidently state here that there was a single book to win them all. Probably because it's not a single book, really.
By virtue of his contribution to the best video game[s] ever, Mass Effect, Patrick Weekes was a hero of mine long before he started writing books. His Rogues of the Republic trilogy started off with the magnificent The Palace Job, a book that earnt its magnificence partly from the fact it was a standalone. Then came a sequel, The Prophecy Con, that wasn't as good but was still excellent, and then came the third in the trilogy (?) - The Paladin Caper - that was even lesser but was still damn good. Most importantly, the now trilogy has all the best things one could expect out of a good fantasy trilogy of books. Thus The Paladin Caper represents a rare case for a trilogy that started well, progresses well, and is well concluded.
There is also that overarching message that is often missing from lesser tales of fantasy. There is the fact that that message is ever so relevant and is brimming with the liberal values that I, personally, hold so dear. There is a wide collection of round characters to pick from, many of which are women and members of minorities, in contrast to this big real world of ours where literature characters tend to be defined by a single marketing department's statement. And there is an ever so entertaining plot, too!
I just hope to see more from Patrick Weekes.

Best music:
Is it just me or is it much harder to appreciate good music nowadays when it takes so very little effort to acquire it? I love streaming and I enjoy being pushed with dozens of new curated albums each week to sample and marvel at, but the lack of ceremony and glamour about it does make it harder to appreciate the music itself. In music, as in almost every other thing in life, the harder something is to acquire, the more rewarding it is.

Of the rewarding new albums this year had to offer, one stood above the rest: David Bowie's Blackstar. I will admit my initial response to the album's release was a disappointed one; not because of it being of lesser quality but rather because most of the songs included in the album were already released, in one form or another, over the year or so prior to the album coming out as an album. I simply wanted more.
Needless to say, this perspective vaporised upon learning of Bowie's death. That initially disappointed outlook turned into vast appreciation for that great artist's final gift to humanity. What a legacy, and what a way to conclude a legacy with!
It is said that the end is important in everything. It is sad to have been there to witness Bowie's end, but it is also great to be able to continuously enjoy this greatest of endings.
P.S. By now we know Blackstar (the song) was limited to less than ten minutes on account of an iTunes limitation. I am here to officially complain before Apple of depriving us from what would have been an even more marvellous creation due to a dumb policy.

Best game:
I seem to be bombarded with games from all directions these days. No, this is not a complaint; some bombardments are positive ones. It's just that I feel like I am more in the business of collecting games than playing them. Did I mention I do not have time for much of anything these days?
I tried my hands at board games (most notably Camel Up, which became a family favourite). Card games (Hanabi). Some A List console games, of which I will mention Fallout 4 as the standout that - as good as it was - could not earn enough of my time to justify an existence. And I have played tons of mobile games, specifically iPad games, of which I seem to like the various incarnations of board games the most.
But when the dust is settled and the novelty wears off, there is one game I always gravitate back to. One game I can spend days on end playing. It is a PC game (by far my least favourite gaming platform, mostly on account of my affection to Windows) and it is a game on which I did not even spend a cent. It is World of Tanks.
I can discuss here how this not new anymore game has improved this past year through various releases, but that's not the point. The point of this MMO is that every round is five minutes long, which suits this time deprived person; and every round is its own riddle. That is, how do I make the most of this tank I have given this opposition that I have been pitted against and with this lot supporting me on this particular map? The answer is different each time.
Yes, I get splattered a lot, often quickly and brutally so. I argue that is part of the game's charms: it is exactly because I choose not to spend any money on the game and make the most of the compromised fleet of tanks at my disposal that turns each round into an intriguing - and ever so rewarding experience when things do work out - optimisation problem, if you will.
And just in case you're a would be tank expert and you're wondering if we ever played a round together: I'm the one that always tries for the pincer movement. Unless I play a heavy tank, because they're too slow for pincer movements. Or artillery. But give me a Hellcat and the sky's the limit [at least until someone outflanks me and demonstrates just how feeble the armour on this tank destroyer is].

Best TV:
As has been the case in recent years, the most rewarding visual art nowadays tends to come in the form of the multi episodic TV series meant to be consumed online (sans ads, if I might add). The lack of time restrictions coupled with the freedom from designing episodes for the sole purpose of ensuring the viewer comes back next week offers artistic freedoms that are now being actively exploited.
There is therefore plenty to recommend. In the comedy department, I was captivated by Utopia (which, for some reason, was called Wonderland in the USA), the story of an Australian government agency trying to do well in infrastructure development but finding itself strangled on all sides by politics and bureaucracy. The resemblance to real life Australian events is, I assume, less than coincidental.
Also worth mentioning is the fourth season of House of Cards. By now we know the story and its themes; where the fourth season excels is in its cinematic values (which I will attribute mostly to Robin Wright, the director of at least most of this season’s episodes). It is simply well made, cinematically, reaffirming my observations that cinema now plays second fiddle to TV. In a world where many of us consume media over a smartphone/tablet, the cinema itself is so twentieth century.
In the miniseries department we had The Night Manager, where it was great to see Tom Hiddleston coming of age beside an excellent Hugh Laurie in an extremely well told spy story. In your face, Homeland.
When the dust was settled, however, there was one TV show that stood high - very high - above everything else. The Swedish/Danish production that is The Bridge, or Bron/Broen as per its original title, peaked in quality upon its third season. There is a story well told in there, but most of all there are the characters that are so well developed, blemishes included. Sofia Helin’s autistic character of Malmo police detective Saga feels so familiar by now that I consider her a household member, a mighty achievement for any art form.
Perhaps even more encouraging is the fact one does not need Hollywood’s piles of money to come up with the goods; a good script with fine actors will do.
Posted by Moshe Reuveni at 7/29/2016 10:10:00 am No comments:
Email ThisBlogThis!Share to TwitterShare to FacebookShare to Pinterest
Labels: R-Wards
Newer Posts Older Posts Home
Subscribe to: Posts (Atom)