Zen Pencils by Gavin Aung Than 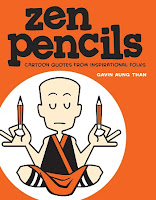 Lowdown: Famous (and not so famous) inspirational quotes receive the comic treatment.
Review:
I’ve been focusing on my comic book reading lately. It's the direct result of my efforts to clear up space on my iPad so I can resume playing the storage consuming monster that is World of Tanks (close to 3 f-ing gigs!). It's just that, through their art, comics occupy much more space than the simple written word. Thus, eventually, I reached Zen Pencils, a book I’ve originally encountered while browsing around a book shop (a paper book shop – yes, they still exist!) and thought could fill up a special corner in my reading.
Zen Pencils starts with a few simply written words telling us the personal story of author Gavin Aung Than. According to these words, he was your run-of-the-mill office employee doing design stuff for the benefit of his employers yet feeling strangled at that. Until, that is, he came up with the idea of Zen Pencils – creating comic renditions of famous inspirational quotes. He did what most of us will not: he quit his day job, sold his house, and focused on his new website. Lo and behold, he was successful! Good on him, I say, even if he makes me feel like a failure through and through.
The point of this personal story is that it explains the comic that follows throughout the rest of this book. It is all about quotes urging us to follow our hearts, persevere despite initial setbacks, grind our teeth at naysayers, and then – and only then – witness our dreams come true. In other words, the author is telling us to do as he did. Or, in even other words, the author is on a campaign to justify/pat himself on the back for following his dreams, as if he requires a constant drip feed of positive encouragement.
The problem with these arguments is dead obvious. Not all of us can afford to follow our dreams, period. Think about the vast majority of people in manufacturing, all the cleaners, people working the supermarkets, and the vast majority of dead end jobs out there: the people working those are almost certainly doing them because they have to do it or they’d find themselves a new career as street bums. And no matter what the distinguished Mr Than tells us, most of those people do not have a choice on the matter. In the meat grinder that is contemporary life, we are reenacting the role of the World War 1 soldier being ordered to go over the top or risk a bullet from his officer's revolver in his back. Stuck between a rock and a hard place, those of us with an shred of responsibility have to go over the top; we have to grind out teeth and work our day jobs.
All that aside, it is also clear that from the pure economics point of view, only a tiny minority of us can be supported by the vast majority of us so as to sustain itself on the noble occupation of art. Someone has to get the food, someone has to pave the roads, etc.
My criticism does not mean I did not enjoy Than’s work. I did! His art is lovely to look at, and the quotes he picks on are worth picking on because no matter what I say there is a lot to learn from them. Personally, I was touched by the statement on office life saying we lock ourselves at the office for 40 hours a week for the sake of 10 productive hours (a point I have already identified to be the biggest problem in my life). I was also touched by a school graduate speech in which she looks back at her years doing the right thing to get the grades but missing out on life. Hey, that’s my academic life story in a nutshell. And yes, if I had the chance, and given the wisdom that comes with age and hindsight, I would have probably done things differently. Isn’t that insight worth Zen Pencils? Yeah, why not.
Overall: I find Zen Pencils the perfect tool with which to garner the inspiration I need to go forth and have another try at World of Tanks despite repeatedly getting thrashed by opposition yielding far superior weapons to my wagons. 3 to 3.5 inspired crabs out of 5.
Posted by Moshe Reuveni at 6/13/2015 11:50:00 am
Email ThisBlogThis!Share to TwitterShare to FacebookShare to Pinterest
Labels: Comic