Blueprint for Armageddon by Dan Carlin 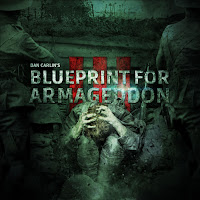 Lowdown: A history podcast covering World War 1.
Review:
My colleague Sam Harris and I may not see eye to eye on everything, but after he recommended Dan Carlin’s history podcasts and his World War 1 series in particular I had to give it a look. And once I did, I had to stay for the ride. Yes, it was so good, it even made me change my attitudes towards audio books; it was so good my young son wanted to listen to it; it was so good the whole family listened to it in the car.
Currently, Blueprint for Armageddon numbers four episodes, each between 3 to 4 hours long. You can reach out and grab them for free here. Each of those is narrated in a very professional manner by one voice (I assume it’s Carlin’s) with no hiccups of errors whatsoever – as production values go, this is as professional as it gets.
The first episode deals with probably the most interesting thing about World War 1, the world setup that got it to start in the first place. We hear of the politics and we hear Carlin’s views, that a lot of the politics that led to war could have been circumvented if it were for a luckier roll of the dictatorship dice dictating who the rulers of Germany, Russia and Austria-Hungary were as well as the issues with the democracies of the time. We also see things from the refreshing point of view of the Germans, a rather refreshing approach given how easily dismissed as evil they are. So easily dismissed we forget they had their reasons to be involved in what was hell for them, too. Carlin even dares to ask a question that although raised by others is still rather brave: wouldn't the world been a better place had the Germans won?
Episode 2 takes off very early during the war, where the first episode left off, and covers the crucial first few weeks/months of the war. The months that led to the following years of stalemate. Carlin goes into a lot of detail in order to explain the technological background leading to this rather unique stalemate that also churned through human bodies at an unprecedented rate.
Episode 3 covers 1915, including Gallipoli and the Armenian genocide, while episode 4 covers 1916 including the battles of Verdun and the Somme. The rest of the war is not covered, although I assume it may be just a question of time till Carlin follows up with additional episodes. Given the depth of preparations on display, these are clearly intensively time consuming affairs.
Although each episode is long, there is that much that Carlin can cover. Thus he did leave me rather annoyed at not being told why, exactly, the Germans chose to turn their army away just as they were on the verge of conquering Paris.
On the positive/constructive side, Carlin directs most of his energies towards the human side of things and trying to figure out what the human experience of the war was like. This manifests itself in trying to look at the war through our modern eyes and answering the question of whether the current generation would fight this war. Or whether we would choose the practical approach, and when the officer with the revolver orders us to go over the top us soldiers would go over him instead – in a cynical 6 bullets vs. troves of machine guns calculation.
The ultimate question is why did people fight the fruitless fight and continue to do so over the years, coupled with why did their societies support them in doing so? There are no definitive answers there, but Carlin seems to think it was product of the culture of the time. The world is a very different place today, and while it does seem easy to send our poorer members to fight and die on our behalf in places such as Iraq or Afghanistan, society will not tolerate punishment laid to higher classes. At the time, however, the gulf between the upper classes and the majority was so large that the rulers of the time were able to put their hands on the meat fodder their armies needed. Given that logic, it can be argued that perhaps the biggest danger to contemporary society is the rising inequality between classes and the reduction in interclass mobility?
This point aside, I agree with Carlin that World War 1 is fascinating due to the fact we are still fighting this war. Essentially all the troubles of today’s world, from the Middle East through terrorism, are a direct result of the world that World War 1 had created. If we seek to be able to solve these problems, then studying World War 1 would be a great start. Thankfully, Carlin is there to make our job easier there.
Overall:
I thoroughly enjoyed Carlin’s learning experience. The facts may be similar to those in Barbara Tuchman’s The Guns of August, but the modern eye perspective and the learnings are much more significant. 4.5 out of 5 crabs.
It is also important to note that in this year where many countries celebrate the war's 100th birthday by glorifying the sacrifices of the soldiers in not so thinly disguised attempts to get us to endorse their modern day war mongering, Dan Carlin stands and boldly points a finger at the leaders responsible for that great war. Important because we, too, seem to have scored poorly in the current generation's roll of the leadership dice.

11/2/2015 update:
Having now listened to the recently released 5th episode of Carlin's World War 1 series, I am now raising my rating to 5 out of 5 very well informed crabs. There are two reasons for this change:

Posted by Moshe Reuveni at 11/04/2014 11:41:00 am
Email ThisBlogThis!Share to TwitterShare to FacebookShare to Pinterest
Labels: Audiobook