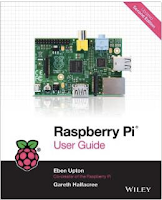 Lowdown: An introduction to the Raspberry Pi, its world and its uses.
Review:

Back in the hectic days of summer school holidays, our household - in its wisdom, but probably through desperation - turned into the physical world for entertainment. We played with marble runs, remote control cars, remote control helicopters, slot cars, and we were hungry for more. One potential approach to satisfying this hunger was to start making stuff of our own. And if making is what we're after, and messing around with computers is in our genes, then perhaps we should be giving the Raspberry Pi some attention? Thus I ended up evaluating this idea through this book, the Raspberry Pi User Guide.
In this reviewer's opinion, the user guide at hand does an excellent job introducing the newbie to the Pi. It starts by providing an overview of existing models' hardware. Then it moved to providing an introduction to the dominant operating systems running the cards, specifically the relevant Linux distributions. I suspect that for most users this would be their first exposure ever to Linux; as a veteran I can say the book's tour is not bad at all. Sure, it's dry, but it's effective in providing the must haves and then taking readers a step further.
It is then that the book steps up a gear into discussions of potential uses for the Raspberry Pi. There's a chapter on using the Pi as a media centre; another on using it as a web server. Last, but not least, the book introduces its reader to the crown jewels by providing a basic guide for using the Pi to control other hardware devices, maker style. I think it is fair to say that no reader should expect to find the answers to everything in this book; it is probably much wiser to pick up a book specialising on one's specific focus point instead. However, as an introduction to the Pi and what it can do, The Raspberry Pi User Guide is probably as good as it can get.
Back to me and my making fever: am I going to get a Raspberry Pi based on what I read in the book? My answer is no, at least not at this stage. The main reason is that I don't really need the Pi: I already have a netbook and a laptop running Linux that I can go crazy with at will, and because these run Ubuntu (as opposed to the Pi's ARM based distributions) I have much more computing power at hand to go crazy with. It's not the Pi that I need, it's time to mess with my existing hardware that I'm short on. As far as media servers go, the Pi could do a nice job but it is also limited in comparison to what I can achieve with my existing Apple [sadly, closed source] ecosystem environment.
Note I'm not saying "never" to the Raspberry Pi. I might use it for server duties, capitalising on its low power consumption (although I would probably prefer a cheap netbook; they come with a display). Eventually, I might decide I do want to make myself something creative and use the Raspberry Pi to base it around. A drone, perhaps, or a 3D printer. The point is, The Raspberry Pi User Guide did its job - it introduced me to the possibilities, and now it's up to me to pick up the challenge.
Overall: An effective all around view of the Raspberry Pi. 3.5 out of 5 crabs.
Posted by Moshe Reuveni at 5/14/2014 11:40:00 pm
Email ThisBlogThis!Share to TwitterShare to FacebookShare to Pinterest
Labels: Book