An Appetite for Wonder by Richard Dawkins

Lowdown: Richard Dawkins’ autobiography, from before birth to The Selfish Gene.
Review:
As far as people who have no idea of my very existence are concerned, Richard Dawkins is not only the person I most revere; during the past decade he has been the most influential, too. I’ll put it this way, whenever he’s stuck in or around Melbourne he can knock on our door. Not to mention him always welcomed for a chat around the dinner table (even my six year old, a big fan of The Magic of Reality, would love that!).
So yeah, when I heard Dawkins is releasing his autobiography, I was looking forward to it. I was hoping to learn more about the person, a person who is usually shy from the personal. I was seeking further inspiration from the man.
An Appetite for Wonder takes its reader on a journey of exploration guided by Dawkins himself. It starts with ancestral history and moves through childhood years in Africa, then public (=private) schooling back in England, then Oxford, and culminating through the turning into a scientist. Proceedings end upon the release of The Selfish Gene, which Dawkins considers a milestone separating his life in two. The story of that second half, promises Dawkins, will be told in a follow up to be released in two years’ time.
It is always interesting to read a well written autobiography in the sense of peering through a window into another world. In Dawkins’ case, a world that started with the British Empire and moved through an education system that, thus far, I was only familiar with through Pink Floyd’s “we don’t need no education” (I’m lying there, because I read about it in Christopher Hitchens’ Hitch-22, but that was only a recent thing). I guess what I am trying to say here is that An Appetite for Wonder works the same way as Downton Abbey: it shows us a world now gone that many people like to reflect on as “the good old days”. Only that with Dawkins being Dawkins we’re exposed to the honest truth, and that has a lot to do with things not being that great (think of forced cold water baths each morning or total segregation from the opposite sex). The changing perspectives that our always evolving culture brings along have a say, too; when examined through contemporary eyes, things look different to what they might have looked like at the time.
Dawkins may not be telling us things that would knock us off our reading chairs, but his retrospective analysis sure hits home. Consider his account of school bullying at the various prestigious schools he’s been to, and his regrets for not stepping in to defend the weak. I am bothered by the exact same notions myself: I recall with horror how, back at primary school, I watched and laughed when a guy I considered a best friend was forced to endure a garbage bin over his head. While I am happy to report that person is still a best friend, I often wonder why he still calls me a friend. Regardless, I agree with Dawkins’ conclusion in that despite common conceptions, we are not the same persons we were decades ago. While I see much room for self improvement, I would also like to believe that while my mechanics aren’t as good as they used to be during my younger years I am now a much better person.
With all the praise I can bestow on Dawkins and his latest book, I have to qualify and state I felt An Appetite for Wonder failed when it came to making me understand what it was that made Dawkins reach the status he now has. A lot of detail is there to explain his ability to communicate complex ideas clearly and his rise to professional fame; but I felt like I missed something when it came to that driving spark that ignited the passion that, surely, had to have driven Dawkins to his current heights. Perhaps I’m looking for something I shall only find in the follow up autobiography; perhaps this is omission is directly related to Dawkins’ rather humble nature. Regardless, I felt like I missed something important in the making of this great person.
Last, but not least, I would like to note a technical deficiency in An Appetite for Wonder. For an avid ebook reader, I have to note this is the first Richard Dawkins book I have acquired in electronic format (I own the rest in paper copies; all the rest). Perhaps I should have stuck to paper, because my Kindle had totally distorted all the poetry quotes Dawkins often invokes in his book. Check this photo as an example for what I had to endure and you’d understand why I had to skip through significant portions of the book: 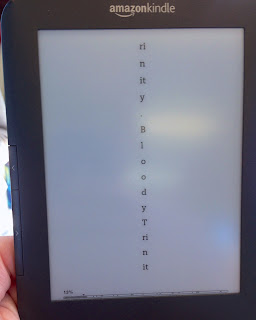 There were times in which I had to hold myself back from asking Amazon for my money back.
Overall: I will passionately read anything coming out of Richard Dawkins’ pen or keyboard. In many respects, An Appetite for Wonder was a passionate read, yet I could not avoid feeling it lacked in this very department I was hoping for the most. 3.5 out of 5 stars.
Posted by Moshe Reuveni at 11/05/2013 12:57:00 am
Email ThisBlogThis!Share to TwitterShare to FacebookShare to Pinterest
Labels: Book