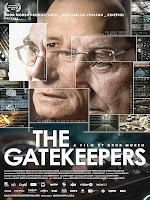 Lowdown: Interviews with six former Shin Bet heads.
Review:
As running jokes at work have it, I am an Israeli secret agent on some exotic assignment at Australia. This implies others should be wary of me. The fact evolved separately on different occasions implies this is no laughing matter; on account of looking different and behaving differently, people are intimidated by me. Either that or their sense of humour is universally suffering. On my part I will say that my actual interactions with genuine Israeli Mossad/Shin Bet agents have left me unimpressed: to put it politely, I wouldn't be inviting any of them to dinner.
The qualities that make one work at such organisations do not make one a nice person to hang out with. The problem is probably magnified when discussing those who made it to the top of the food chain with the Shin Bet, as The Gatekeepers has: it interviews six former heads of the Shin Bet (essentially, all living former heads) and discusses events taking place with their organisation, either under their command or previously, from 1967 till today. 1967 is an important junction in Israeli history because that was when the Six Day War took place with Israel conquering the West Bank and the Gaza Strip. That was when Israel became a conqueror and an occupier of more than a million people.
Accompanied by old videos, photos and computer enhancements of old photos we basically hear those former Shin Bet heads talking (in Hebrew) for a bit more than an hour and a half. They discuss the adjustments their organisation had to make upon Israel assuming ownership of the occupied territories, the rise of the settlements, the number 300 bus incident, and both intifadas. The beauty of the affair is in the common themes raised by all six: the lacklustre nature of the politicians giving the orders, never managing to miss an opportunity to avoid peace; while on the other hand they acknowledge becoming more aware of the other side's plight so that while they were all in charge of doing awful things to Palestinians they also developed some soft spots. In other words, their unique position as head of the Shin Bet had turned them into lefties arguing, one by one, that Israel should just sit down and open an honest dialog with its Arab neighbours. Either that or forever live on its sword.
The sad part of this insight is that due to the former insight concerning the nature of politicians this will never happen. In other words, The Gatekeepers is telling us - straight from the horses' mouths - why the Arab/Israeli conflict is ongoing, why we should not expect to see it solved any time soon, and why the whole affair is a sad tragedy. In taking us through this eye opening journey, presenting us with the evidence along the way, and then delivering us the inevitable conclusion, The Gatekeepers renders itself a top class documentary.
On a higher philosophical plane, The Gatekeepers suggests why humanity in general is unable to contend with problems that are obviously there and for which the solutions are known. Think global warming, for example: the same failures that have Israelis killing Palestinians and vice versa are having the whole planet walking fast towards a point of no return that could well see civilisation as we know it collapsing. All the while, by focusing on the short term tactics rather than the strategic solutions, our gatekeepers are failing to protect us.
Favourite scenes: I don't know if "favourite" is the right word, but fact of the matter is that I have intimate familiarity with some of the subject matter. Seeing these matters discussed now, with the benefit of hindsight, makes it clear my years with the Israeli army have been nothing but folly. A waste of some of the best years of my life.
Overall: A mesmerising, in the bad sense of the word, documentary. There is a lot to be learnt from The Gatekeepers; I doubt anything would change, though. 4.5 out of 5 stars.
Posted by Moshe Reuveni at 10/05/2013 09:46:00 pm
Email ThisBlogThis!Share to TwitterShare to FacebookShare to Pinterest
Labels: Film