Lowdown: A person’s life is shattered after rumours of him child molesting spread.
Review:
I’ve been having good experience with Danish films over the past few years, and The Hunt (or Jagten, originally) is no exception.
Set at a small town preparing for Christmas, The Hunt follows Lucas (Mads Mikkelsen), a teacher in his forties. He used to be a school teacher but now he works at a kindergarten; he used to be married but now he’s on his own and fighting for custody over his son. At least he has friends.
Or does he? When the little daughter of Lucas’ best friend is not happy to share Lucas with her kinder compatriots, and utters a few words she heard elsewhere, the kindergarten supervisor takes matters very seriously. An investigator comes in and puts words in the mouth of the girl; Lucas is quickly suspended. Shortly afterwards, more children come up with similar stories as investigations aim wider. It doesn’t take long at all before most of Lucas’ friends, including his best, renounce him, before he loses his job, and before even the supermarket violently kicks him out of its midsts.
A simple film made with what is clearly a small budget, at least by Hollywood’s standards, The Hunt is highly potent drama. It tells us how quickly and easily the world we carefully constructed all our lives can crumble for no good reason, and how fragile human relationships can be. By aiming at a matter that has become universally accepted, the violation of the innocence of children, The Hunt becomes even more effective: it shows us how society went mad with this particular concept. As in, can you imagine a Nabokov publishing Lolita today?
We don’t have to go that far, though. In 2008 Australia, police confiscated photos from an art exhibition depicting teenage nudity (see here). Last weekend, upon visiting the Melbourne Museum, I noted their long running exhibition on the human body has been partly blocked “for renovations”; I was able to take this photo from behind the barriers: 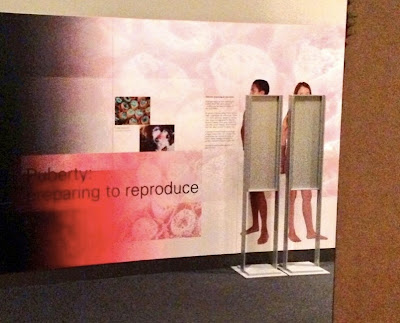 What the museum won’t let you see are photos of a naked boy and a girl. Because, as you can now see, contemporary society will not tolerate that. Not even at a place of knowledge such as a museum! Surely, we’ve gone mad; yes, we need to defend children, but at the same time we need to protect art and knowledge. The Hunt proves that point and lets its viewers ponder how it applies elsewhere.
Best scene: I liked the analogy of a bleeding Lucas, punched out of the supermarket and crippling away, on Christmas eve. All for others’ sins.
Overall: Well made and thought provoking. 4 out of 5 stars.
Posted by Moshe Reuveni at 9/22/2013 12:38:00 am
Email ThisBlogThis!Share to TwitterShare to FacebookShare to Pinterest
Labels: Film