The Choice of Hercules by A. C. Grayling

Lowdown: [Another] Grayling guide to living the good life.
Review:
A.C. Grayling seems to be a man on a mission to teach us the good values of humanism. Of course, much worse quests can be imagined: not only do I agree with Grayling in principle, I also think he does a great job promoting these views with the public. However, with this being the third such guide that I’m reading from Grayling, I find myself a bit fed up with reading the same messages again and again.
In 2008’s The Choice of Hercules, Grayling starts off with the choice given to Hercules, as portrayed in many a classic drawing (see below). Hercules had to choose between two wives: a beautiful one that symbolizes duty, and in most generations has been interpreted as some form of Church piety, and an even more beautiful one with whom Hercules would have had much bodily pleasure. Hercules chose the former, but Grayling goes out to ask – how do we really know which of these choices is better? Could it be that we do not really have to choose between the two but rather have them both? 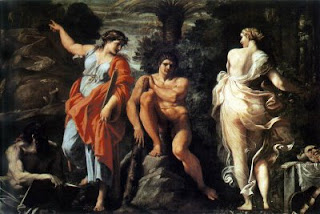 From this point onwards, Grayling goes out to propose his take on how to live a good life and thus be able to make our own herculean choices. The answer is divided into the three parts that make the book up: the first deals with the personal life, the second with the issues society faces in general, and the third makes the argument that a truly good life can only take place in a good society and therefore goes to discuss the makings of a good society in depth. You can argue the connection between where Grayling ends up and his starting point with Hercules is a bit loose, but regardless, The Choice of Hercules presents an inspiring and illuminating framework for living the good life. A framework that, by the way, does not require its practitioner to believe in imaginary friends and anything else out of this world.
My problem with The Choice of Hercules is that I recently came off a Grayling book that tried to pretty much do the same thing, The Good Book. Thus I felt quite frustrated when I happened to reread the same things I read in The Good Book, while on the other hand feeling totally fixated and served an excellent lesson when presented with ideas I haven’t got to read in The Good Book (either because that book doesn’t deal with them or because I never got to read The Good Book from start to finish). For example, reading on the need to live the examined life bored the hell out of me, while reading Grayling’s views on family values and sex had me totally transfixed.
You may argue the problem is entirely mine, for The Good Book was published after The Choice of Hercules, and therefore I was reading the books the wrong way around. True; on the other hand, I will not be the first to point out Grayling has been writing the same book again and again for quite a while. With that said, The Choice of Hercules stands over the Good Book in several important factors: page number wise, it is a very digestible as well as easy to consume quantity wise; and language wise, it utilizes Grayling superb mastery of the English language to express itself in plain language rather than the Good Book’s annoying bible copycat style. Since I did not read The Good Book in its entirety I cannot, however, comment on which of the two is winning the day on matters of scope and breadth.
Overall: I can only give The Choice of Hercules 3 out of 5 stars, and even that comes with an effort. However, if this was my first ever Grayling I would have probably given it something like 4 to 4.5 stars; to the right reader The Choice of Hercules can be a truly inspiring read.
Posted by Moshe Reuveni at 11/21/2012 11:54:00 pm
Email ThisBlogThis!Share to TwitterShare to FacebookShare to Pinterest
Labels: Book