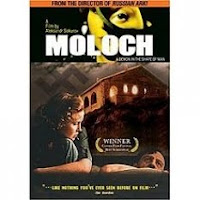 Lowdown: Hitler spends a few days at the Eagles Nest with his cronies and Eva Braun.
Review:
In the middle of World War 2, Hitler and a few of his linchpins, notably Josef Goebbels, arrive at the Eagle’s Nest fortress to spend a few days without talking politics. While Hitler is treated like some sort of a deity by most people around him, like the scriber who writes down every word coming out of his mouth, the otherwise bored Eva Braun teases him left and right. Between their moments in the bedroom and between taking a dump in the woods, Hitler is exposed under a different light to the one we are used to. In the meantime, the insanity of the whole Nazi idea is exposed.
That’s the gist of the message pushed forward by Russian director Aleksandr Sokurov (famous for his Russian Ark). The catch, though, is not in what Molokh is trying to say but rather in the way it chooses to say what it does. The best single word to describe that way is “arty”.
I’ll start with what I seem to be able to tell by the credits: the film features Russian actors dubbed into German speech. Beyond that, the film is incredibly slow and often seems to intentionally avoid getting to the point; it is as if the director is actively trying to defy the rules of conventional cinema as we know it.
Add element to the other, and the feeling I got was that distinct “why am I watching this” feeling. Molokh may be an orgy for some cinema buff, but to me it was plain boring; I don’t like that fuzzy feeling of vagueness, sorry.
Distinct scene: The film starts with a long scene featuring the woman that turns out to be Eva Braun dancing and prancing through the Eagle’s Nest naked. This rather long scene raises the question of “what is it trying to say”, a question I found myself asking several times during Molokh (although, once the answer became clearer, I started asking myself “why is the director saying what he wants to say in this weird kind of a way”).
Overall: Molokh is a movie that forgot movies also need to entertain. 1 out of 5 stars.
Posted by Moshe Reuveni at 11/05/2012 11:57:00 pm
Email ThisBlogThis!Share to TwitterShare to FacebookShare to Pinterest
Labels: Film