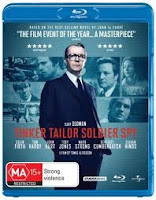 Lowdown: British spies try to identify the Russian mole in their cold war ranks.
Review:
I still have vivid teenage memories from John le Carré's The Spy Who Came in from the Cold. Critics kept on informing this was an excellent book, yet when I read the book - as well as other le Carré books - I could only find boredom. Mind you, it wasn't your usual type of boredom; it was mixed with the distinct feeling I was unable to truly claim to understand the books. The experience not only made me feel inferior, perhaps not unjustly so, it also drove me away from reading - and very unjustly so. It pushed me towards the cheaper, quicker satisfaction end of the reading scales. It took decades for me to recover my reading and look again at quality books.
Sadly, Tinker Tailor Soldier Spy - a film based on le Carré's cold war espionage adventures and starring his hero, George Smiley, is directly related to the stuff of my youth experience. It's the early seventies, and Britain is deep in cold war games with the USSR. Gary Oldman stars as Smiley, a British master spy put in charge of identifying the Russian mole in British spying ranks. He follows previous efforts by Control (John Hurt), efforts that fell through and had one of the spies (Mark Strong) fall into Russian hands while on this quest. Everyone knows there is a Russain informer in the ranks, the question is just who - Ciarán Hinds? Colin Firth? Any of the others?
In order to take us on a journey towards the answer, Tinker Tailor Soldier Spy weaves a complex web of encounters between various characters. The encounters are not presented linearly and are often hard to follow; harder still is the ability to connect one event to another. Hence this lingering ambiguity I remembered from the books, that inability to confidently state I understand what's going on.
Yet if vague nature is a problem, boredom is much worse. Tinker Tailor Soldier Spy is a very slow film; with not much happening, it was almost torture to watch. I guess if one's a fan of this le Carré style then one would love the film, but me? I was annoyed at recalling the depths such prose drove me to.
Technical assessment: I know I promised to avoid technical reviews for a while, but I have to raise a flag with this one. It seems Tinker Tailor Soldier Spy is deliberately made to look & feel seventies, with grain and excessive noise evident on the Blu-ray picture. It may be seventies like, but it distracted the hell out of me.
Overall:
A bore-fest with A list actors and fine acting is still a bore-fest. It took me years to confidently conclude I am fully capable of finding books that both challenge my intellect and are interesting to read, unlike Smiley's. Having learned from past mistakes, it took me much less than Tinker Tailor Soldier Spy's two hours or so to realize there are much better films for me to watch out there.
I'll be generous and give Tinker Tailor 2 out of 5 stars, but I will issue a severe warning for everyone not to be too tempted by the vast array of British stars appearing on this title.
Posted by Moshe Reuveni at 7/05/2012 11:18:00 pm
Email ThisBlogThis!Share to TwitterShare to FacebookShare to Pinterest
Labels: Film