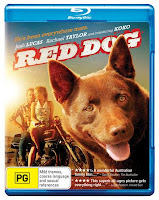 Lowdown: A stray dog unites an Aussie mining community at the middle of nowhere.
Review:
Australia is a country with a chip on its shoulders. Not that this is an Australia exclusive club; I don’t know a country without one. Australia, however, seems to have the need to prove itself more than others. One only needs to check on Australian Olympics medal tally anxiety to witness the problem, or check on the anxieties involving an Australia – England cricket match.
One potential theory for Australia’s aggravated syndromes could be the lack of a founding myth. The USA has its war with Britain, tea parties, George Washington and a declaration of independence to rely on; Israel has its holocaust and its war of independence. Australia, however, has nothing to compare to such momentous events. If anything, Australia is in a constant process of reformation, with significant portions of its population – some 30%, if I remember correctly - not made and born here. Rushing to fill this very gap is Red Dog, a film that is more Australian than Australia.
Red Dog has us trekking across space and time to the Western Australia of the seventies. Just as it is today, the economy of WA was mining driven; one such mining community is the focus of Red Dog. That is, both Red Dog the film and Red Dog the stray dog that decides to adopt the town as his own. The town is made of a non homogeneous collection of people from all over the world, including – as the movie takes care to tell us – Italy, Russia, the USA, and even Melbourne. Red Dog depicts the place to be full of tough yet gentle men; everyone looks like a bully, but they’re all gentle bullies along the lines of Monty Python's lumberjacks (only that Red Dog's seem to avoid anything sexual like the plague). The exceptions to the rule are the token pretty girl (Rachael Taylor) and, of course, our Red Dog. As one can expect from a feel good film such as Red Dog that’s aimed particularly at making Aussies feel good about themselves (and forget what has been done in our name to the native owners of this land), Red Dog takes its characters and us to short journeys where they/us find themselves/ourselves through the dog. The story is told in flashback mode: Red Dog is about to die, and the local heroes tell his tales to a passing by truck driver who is suspiciously interested in the weird town’s stories. Oh, cynical me.
The problem is, Red Dog is one of those films that overfeeds me with cynicism fodder. It is cliché incarnate, drawing a picture so flawless it is obviously telling a lie. Red Dog is schmaltz incarnate, too, and the fact its myth is said to have its roots on a real red dog is completely meaningless. This film belongs together with fifties episodes of The Wonderful World of Disney, not contemporary 21st century cinema. The fact Red Dog was a big hit with Australian box offices is rather worrying.
Best scene: That big brute from Melbourne, with a porn style mustache? Behind closed doors, when no one is looking, he’s into knitting.
Overall: A shameless pat on our Aussie backs that we shouldn’t really need. 2 out of 5 stars.
Posted by Moshe Reuveni at 6/09/2012 12:46:00 am
Email ThisBlogThis!Share to TwitterShare to FacebookShare to Pinterest
Labels: Film