The Monarchy by Christopher Hitchens 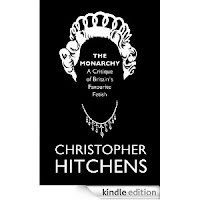 Lowdown: Hitchens lays down the case against the British monarchy.
Review:
I have been on the lookout for Christopher Hitchens' The Monarchy for quite a while. This essay was initially published in the nineties and only became available on ebook format a few days ago, probably in an attempt to capitalize on the queen's diamond jubilee. For what it was worth, it worked on me, even though I would have preferred the ebook to be available regardless of special occasions.
It shouldn't surprise anyone to learn Hitchens was not a fan of the British monarchy. Contents wise, The Monarchy is split in two: in the first, Hitchens lays down the reasons why the monarchy is bad. If pressed to sum it up in one sentence, he argues the British fetish with the queen and company is similar to religious faith in its nature (and we know what Hitchens thinks of religious faith). The second half looks at the arguments in favor of the monarchy (e.g., "the monarchy does not have political power"), and refutes them one by one. All in all, I would say it's a well laid case against the institution.
Style and language count with Hitchens, yet I was still surprised and perhaps even disappointed with Hitchens' approach in laying his arguments. The British monarchy is such a house of cards it cries out for a sweet and witty knockout blow, the way Hitchens is famous for delivering upon the religious authorities with whom he used to debate so often in the past. Alas, such a knockout punch never arrives; instead, Hitchens lays out layer upon layer of articulate arguments. Don't get me wrong, that's perfectly fine, but I was hoping for better comedy values. I mean, Prince Charles is excellent joke fodder, so why doesn't Hitchens have a go?
Another aspect I felt missing was an examination of the monarchy through the eyes of a commonwealth member. Hitchens mentions the absurdity of the current queen being the [former] ruler of countries like Pakistan, but does not stop to ask the question of why do some citizens of the commonwealth still wish the queen as their head of state. I argue that many of the Aussie monarchists feel this way because they want to preserve their culture at all costs in the face of non white, non Christian, non English speaking immigration that makes many Aussies feel a minority in their own country. Politicians use and abuse these feelings, hence the need for that good old Hitchens treatment - that, sadly, never came.
Overall: The Monarchy is probably too articulate for its own good, while also lacking some important relevancy to the non British in our midst. Still, it is a fine collection of articulate arguments worthy of 3.5 out of 5 stars.
Posted by Moshe Reuveni at 6/02/2012 12:33:00 am
Email ThisBlogThis!Share to TwitterShare to FacebookShare to Pinterest
Labels: Book

Hi, just stumbled upon your post as I've just started reading this e-bool. I've also found some other Hitchens articles on the monarchy: One on the Royal Wedding http://www.slate.com/articles/news_and_politics/fighting_words/2011/04/beware_the_inlaws.html On Prince Charles http://www.slate.com/articles/news_and_politics/fighting_words/2010/06/charles_prince_of_piffle.html and on the monarchy generally (http://www.guardian.co.uk/uk/2000/dec/06/monarchy.features11 + http://www.nytimes.com/2007/07/08/books/review/Hitchens.html) The Royal Wedding and Prince Charles ones are pretty good for comedy value.

Thanks for the effort of bringing all these resources here! I read all these articles before, an act that did send me looking around to see whether The Monarchy got republished.