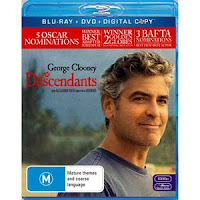 Lowdown: A Hawaiian guy has to contend with a multitude of family issues.
Review:
I watched The Descendants with great anticipation. At the shallow level, Hawaii – where the film takes place – is likely to be the subject of my next visit to the USA; it's a geography thing. It’s not the most attractive place that country has to offer, but between Pearl Harbor, volcanoes and telescopes the place doesn’t seem bad either. Second, and more importantly, The Descendants is a film from Alexander Payne, whose previous two features – About Schmidt and Sideways – were simply marvelous. As usual, though, the higher the anticipation the greater the disappointment.
George Clooney plays Matt King, the guy around which The Descendants pivots. He’s middle aged and his marriage went past its peak, but that did not prepare him for his wife getting herself at a critical condition, unconscious at the hospital, following a boating accident. In parallel we learn King is in charge of a large piece of land he and his family inherited all the way back from the pre Western days of Hawaii, a land whose worth is now measured in the hundreds of millions. The extended family wants to cash in on the land, while King is rather eccentric in refusing to use the regular money coming from the land. As a result of these two challenges, the wife and the land, our King faces multiple challenges of his own: he needs to get his two daughters on his side and he needs to get the rest of his family on his side. Things are not easy, though, and as King goes along things become even harder. The Descendants’ focus constantly shifts between the daughters and the connection to the land.
There can be no denying The Descendants is fine drama that is well made. However, I thought it lacked the spark from previous Payne flicks. Instead, The Descendants feels too slow, too long for its own good, and dare I say even boring. True, there are some very touching moments across, but it just failed to grip me. Ultimately, the only credit I could give The Descendants is to do with it openly dealing with matters of grief and death, subject matters America seems reluctant to consider.
Best scene: A very disturbed King goes on an extended run, wearing very casual and non athletic footwear, in order to quickly verify a rumor he heard about his wife. This scene, which other directors would have trimmed very tightly, is reminiscent of Payne’s previous films. However, even this seeming humiliation of an A list Hollywood star lacks the power of Payne’s previous efforts.
Overall: A good drama without a sharp edge, The Descendants gets 3 out of 5 stars.
Posted by Moshe Reuveni at 6/05/2012 11:31:00 pm
Email ThisBlogThis!Share to TwitterShare to FacebookShare to Pinterest
Labels: Film