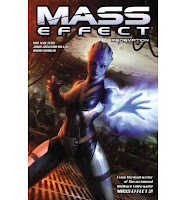 Lowdown: Mass Effect comic following Liara and setting the scene up for Mass Effect 2.
Review:
One of the rare things going for the Mass Effect 3 video game world is players forming attachments to Non Playing Characters (NPCs). By far my favorite Mass Effect 3 NPC is Liara, the blue skinned asexual but obviously female alien that’s built like an Amazon and does the cold blooded smart doctor thing so well. Sure I’d like to know more about her character! Lucky for me, the first comic published for the Mass Effect series, Mass Effect: Redemption, does just that.
Set in order to set the scene for the Mass Effect 2 video game, it tells the story of Liara as she is looking for the body of Commander Shepard (the character you play in all the three Mass Effect games). Always the devoted friend, Liara has to go a long way to locate the body; on her way there she’ll make unlikely allies such as the pro-human Cerberus organization and the criminally inclined Aria. Unsurprisingly, she will also bump into the mysterious Shadow Broker (about whose relationship with Liara we learn more in Mass Effect 3) and the Collectors baddies. Action and biotic powers prevail in this short tale.
I liked Redemption a lot, but I am worried as to whether I liked it for the wrong reasons. In the eyes of this relatively inexperienced comics reader the quality of the art is best described as awesome; just like the games it is very rich. I am also appreciative of the opportunity to learn more about my favorite character as well as learn more about the Mass Effect back story. However, there was always the nagging feeling the comic Liara is not the game’s Liara: the comic portrays “my” Liara as a babe, for lack of a better word, always emphasizing her body’s curvatures and also giving her a tiny bit of that good old “hot but dumb” stereotype. Reading Redemption left me wondering whether I’ve enjoyed it so much because it felt like reading porn!
It seems the problem is not limited to this comic. Bloggers have already raised the alarm bells in relation to Liara’s action figure, released outside the main Mass Effect action figures series (in a very odd way, given the character’s centrality in the whole affair). You can read and view a detailed comparison between the game’s Liara and the totally different figure Liara here (if you can’t be bothered to read the link, I urge you to check this image out instead – it is a study of implied sexism). Sadly, this comparison applies to the Redemption comic as well; definitely not as much, but still too much. It is even evident from the cover, which portrays the game’s Liara and is different to the Liara you will find inside the book.
Overall: I’ve enjoyed Mass Effect: Redemption, but a smarter and more game like portrayal of Liara would have done this comic a whole lot of good. As it is, I’m giving this titillating read 3.5 out of 5 stars.
Posted by Moshe Reuveni at 5/15/2012 11:25:00 pm
Email ThisBlogThis!Share to TwitterShare to FacebookShare to Pinterest
Labels: Comic