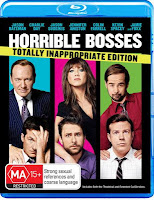 Lowdown: Three disgruntled employees agree to kill each others’ bosses.
Review:
Most of us prefer not to think about it much, but the reality is that us – the 99% - tend to spend the bulk of our conscious hours at the service of a dictatorship, our workplace. This major grip with the capitalist system is regarded as a necessary evil in our otherwise democratic and free lives; or is it? How can we truly claim to be free if we are only so for a minority of the time? It is therefore nice to see Hollywood rise up to the occasion and attack some key ideas of the American Way through Horrible Bosses, even if this attack is only done Hollywood style – the toothless and confrontation averse way.
Horrible Bosses tracks three guys who happen to be best friends and who also happen to work for horrible bosses. The first (Jason Bateman) works for a boss (Kevin Spacey) that makes him work from sunrise to midnight, dangling the carrot of a promotion for years but then choosing someone else for the job – himself. The second is a dental assistant who is constantly sexually harassed by his dentist boss (Jennifer Aniston) and whose criminal record prevents him from looking for a job elsewhere. The last mate works for a chemical plant whose caring and responsible owner (Donald Sutherland) dies suddenly and is replaced by his criminally selfish son (a made to look ugly Colin Farrell). What can our friends do? Illumination comes from an unexpected source (Jamie Foxx), who suggests they kill one another’s boss to help clear themselves of the crime. Thus the plot thickens, and as employees and bosses intermingle comedy happens.
Horrible Bosses is not a film that would make you laugh out loud. Nor is it a classic drama. However, the combination of fine actors obviously having themselves a good time, the generally good story and the occasional laugh do work. Together with the idea at the core of the film, Horrible Bosses delivers in the entertainment department. Pity it didn’t aim a bit higher in the making a statement department.
Best scenes: I thought Jennifer Aniston did a particularly good job at explaining why doing something that’s on every straight guy’s wet dreams is far from a good thing.
Overall: This nice yet Parve movie gets 3 out of 5 stars. I also have to add that Jason Bateman is growing on me.
Posted by Moshe Reuveni at 5/06/2012 12:31:00 am
Email ThisBlogThis!Share to TwitterShare to FacebookShare to Pinterest
Labels: Film

You say he's growing on you. When didn't you like Bateman?

If I remember correctly, you liked It's Your Move just fine.

I never said I didn't like Bateman; my intention was to say it's getting to the stage where him taking part in a film makes it much more attractive. Much more so than his Hollywood profile would suggest.