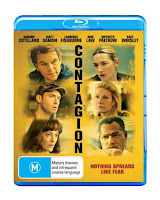 Lowdown: A lethal highly contagious virus hits modern society out of the blue.
Review:
The most interesting question to ask about Contagion is whether this is a science fiction film or not. That question is testimony to the qualities of this film, a film that depicts a horror that could actually hit us but also a film that is far from good enough to inspire more interesting questions.
As many a reviewer said before me, Steven Soderbergh’s Contagion follows the classic Poseidon Adventure horror film formula. Just like The Towering Inferno, our victims don’t know what hit them until it’s too late; just like The Towering Inferno our remaining victims are saved through the heroics of a few; and just like The Towering Inferno, Contagion uses star power with a sledgehammer like subtleness. The difference? This time the calamity is a virus. This time the entire human race is at risk. This time its personal and very documentary like: one can clearly imagine how the events depicted in Contagion can take place tomorrow morning. We actually saw some of them unrolling before us at the outbreak of SARS a few years ago!
As with SARS, Contagion’s malice breaks loose at or around China and Hong Kong. As with SARS, the virus is spread around the world through international flights; in particular, it is brought over to the USA in the body of a Gwyneth Paltrow that doesn’t last too long. Her husband, Matt Damon, has to deal with the reality of losing his wife as well his son’s to the virus just as the world starts to come to grips with the new reality of this biological threat. In parallel, scientists like Laurence Fishburne, Elliott Gouldand and Kate Winslet start working to find a cure while informing the public, just as fame craving bloggers like Jude Law are trying to make a name for themselves through the same virus. We see both humanity’s best and humanity’s worst. Given the international nature of the affair, we have international health agencies send their operatives (e.g., Marion Cotillard) to track down the bug. Thus the plot thickens through a collection of sub plots featuring many characters with limited screen time as we follow multiple events from close range.
The problem? The whole thing doesn’t really work. I mean, the tale is nice and all, but Contagion failed to captivate me with either story or characters. The only thing it has going for it is that specter of authenticity, the “this could happen to us tomorrow” type feeling. I respect that, but I would have expected more from Contagion and Soderbergh in particular.
Notable scenes: A film about a virus is a film where everyone can die in the next scene. Indeed, many do just that – one minute they’re up and running, the next they’re in a body bag. Contagion makes the most of the circumstances it depicts.
Overall: Contagion’s alright, but it proves applying the formula to the letter is unlikely to produce artistic success. 3 out of 5 stars.
Posted by Moshe Reuveni at 5/10/2012 11:48:00 pm
Email ThisBlogThis!Share to TwitterShare to FacebookShare to Pinterest
Labels: Film

I felt the same way about this one. Part of what I thought was missing was an emotional appeal...considering the gravity of what was going on, I thought the actions and reactions of the characters were too unemotional. Therefore I didn't care very much because it felt unrealistic and I couldn't identify with anyone. I found the most captivating character to follow was Kate Winslet's, but for me that's no surprise. :)

I agree about the lack of emotion but disagree with the perceived lack of realism. I think Contagion was very realistic, only that there was nothing for the viewer to attach to in any way. Too clinical an execution.

You don't think that the characters' clinicial and unemotional reactions to such a situation is unrealistic? I don't know, I expected to see at least one meltdown or freakout or something...

Looking back at what happened with the SARS outbreak, my answer is no - I don't think the characters' reactions were unrealistic. Back then there was, for example, a scientist who sacrificed himself to help fight the bug; it didn't sound like he was outspokenly emotional about it.
The same took place with swine flu. I didn't see scientists and health authorities breaking into tears and such. I did see some panic from the largely uninformed public, but Joe Public is hardly ever put under Contagion's microscope.