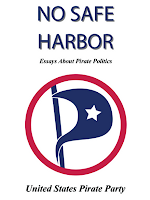 Lowdown: The manifest of the Pirate Party.
Review:
As books go, No Safe Harbor is rather unique: licensed with a Creative Commons license, it is a free download from the site bearing its name (here); if you insist you can also buy it. Curated by the United States Pirate Party, No Safe Harbor is a collection of articles from various sources, ranging from the American Constitution to material written by contemporary piracy movement leaders such as Cory Doctorow, Lawrence Lessig and Rick Falkvinge. These articles form three core subject groups, touching the three core agendas of the pirate movement:
It’s virtually guaranteed the articles would vary in quality, but I have to say I was impressed with the level of discussion at hand. No Safe Harbor is no “let us use bit torrent to our hearts’ content and damn the rest of the world”; in parts it offers elaborate and philosophical discussions. I was particularly taken by the article discussing ideas for the implementation of liquid democracy through the use of the Internet as an enabling tool: the discussions there were similar in mind and spirit to those raised by Robert Heinlein in his science fiction masterpiece The Moon Is a Harsh Mistress. Just like Heinlein, this and other articles are able to pinpoint some of the glaring problems with the way our modern day democracies work and offer alternatives for improvement.
Alas, there are problems with those suggestions. First and foremost, we might and we should act to make our democracies true liberal democracies, yet I the cynic in me that keeps bumping into total indifference in matters of politics by much if not most of Australian society may as well ask if all this effort is worth our while (of course it is; the problem is with the way our systems of education work, or rather don’t). The next problem is to do with the abilities of the pirate parties to change the system from within given how hard it is to get elected: it’s one thing to do so in parts of mainland Europe, where a proportional voting system is in place; it’s quite another to do so in countries like the USA, UK or Australia with their first past the post systems. The UK’s recent failed ballot that tried to change their voting system proves my two points. I guess we can only try!
Relatively short, varied and interesting, No Safe Harbor is an interesting and thought provoking collection of articles coming from a political party genuinely trying to think freshly.
Overall: I was impressed. 3.5 out of 5 stars.
Adequate disclosure: I am currently a member of the Australian Pirate Party.
Posted by Moshe Reuveni at 4/20/2012 12:40:00 am
Email ThisBlogThis!Share to TwitterShare to FacebookShare to Pinterest
Labels: Book