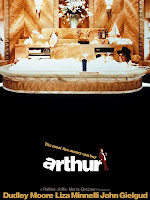 Lowdown: A super rich dude stands to lose it all for love.
Review:
I still remember the night this child's parents came back home after watching 1981's Arthur at the cinemas. To my inevitable question on whether they liked the movie they just watched, my mother replied by saying it was one of the most wonderful films she ever saw. Having seen it myself many times since, I agree: Arthur is a wonderful film that has a lot going for it.
Arthur (Dudley Moore) is a spoiled and very childish adult drowning in his family's millions without having to worry about anything in the world, without having to do anything, and with people looking after his everything. The result is a bit of a brat that abuses the opportunities coming his way as he drowns them in alcohol and hookers. A nice brat, though.
In order to ensure he keeps on getting his family's millions, Arthur needs to follow orders and marry Susan (Jill Eikenberry, of L.A. Law fame), a fellow inheritor of family millions. Arthur doesn't want to do it but can't imagine living without all that money. Until, that is, he stumbles on this charming shop lifter, Linda (Liza Minnelli) and falls in love. What should our Arthur do? Follow his heart and lose his millions, or follow the millions and lose his heart? In order to choose wisely he needs to grow up, but that may be too big a challenge. Only Arthur's loyal servant, old Hobson (John Gielgud) can help make the right decision there.
As comedies go, Arthur is at a rather unique position. It is not only a romantic comedy, it is also a feel good movie: how lovely it is for us commoners to see that even those loaded with money have problems! And how nice it is to see one of them on the brink of becoming one of us! By the same token, it is even nicer to see how one of us (Minnelli) can all of a sudden become "one of them": not unlike Pride and Prejudice, Arthur gives us the illusion that if we play our cards right we might end up with our own Mr Darcy and live in Pemberley / an outrageously expensive apartment on New York's upper east side.
All of the above is magnified through the brilliant cast assembled here. Gielgud's performance has long been acknowledged, but it also has to be said Moore is terrific and oozing of comedy talent. Talking comedy, Linda's father is played by no other than Barney Martin - the guy who later grew up to portray Seinfeld's father. However, I find Minnelli's casting the most interesting: they didn't go with the default supermodel type looks you would have expected for the role but rather went with someone that seems, well, ordinary. By choosing this path the filmmakers managed to make Arthur that much more successful in the delusion department.
Best scenes: Anything with Gilgood in it.
Overall: They don’t make rom-coms like that anymore. 4 out of 5 stars.
Posted by Moshe Reuveni at 4/02/2012 10:40:00 pm
Email ThisBlogThis!Share to TwitterShare to FacebookShare to Pinterest
Labels: Film

I enjoyed it at the time (I still have a soft spot for that sappy song), but I thought that seeing it again would just expose it as a forgettable eighties movie .

Good to hear. I’ll give it a chance.

I'll add some disclaimers:
1. The song is great, but it's hardly played; we could hear it often at every ad break...
2. Arthur is short and concise.
3. Arthur features the same New York I got to visit as a child, an event that had huge influence over me. I can't disconnect from that when I review the movie.