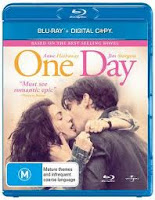 Review:
That good old concern whenever a book is converted into a movie was the main event with One Day. And rightly so: as I described in my book review, I learned of One Day while travelling the UK and reading reviews of the movie that was just released. At the time I didn’t see the movie but elected to read the book instead, enjoying it a lot despite my general disassociation with romantic literature. Now that I got my act together and finally watched the film, the question is – how good is the film given the freshness of the book experience and given the movie script was written by the book’s own David Nicholls?
I won’t bore you with plot details here. As can be expected through the Nicholls factor, One Day the film is very loyal to One Day the book, so if it’s plot you’re after just read my book review; for this forum I will say that One Day is a typical boy/girl love story told over some twenty years by sampling the events of each year’s 15 July.
Back to the key question of how the film compares with the book, a question I could not avoid asking myself throughout One Day’s hundred minutes or so. The immediately noticeable changes are in location: the book’s Greek island holiday has turned French, as did the book’s Roman encounter. I suspect the Frechification of the film was done purely for production cost cutting purposes.
The main difference between the book and the film is one of omission. The reason is clear: to keep the movie flowing and to prevent One Day from becoming an excruciating marathon, The Film takes the main points out of the book’s 15 July yearly encounters and gives us the digested/congested version. Is that good enough, though?
My answer? No. Those almost snippet like excerpts, compared to the book’s depth, were far from enough to get me into the characters. While the book made me loath the boy, identification and admiration for the girl more than compensated for it; with the movie I was not able to dig the girl half as much, nor did I get to despise the boy as much. He’s still an idiot, but not the finely detailed idiot from the book. From a respected work of fiction belonging to a genre I don’t normally venture into, One Day turned into yet another romance on film whose 15 July aces didn’t really make much of a difference. I felt uninvolved, and but for the dramatic ending almost bored. At this point I will mention One Day was directed by Danish director Lone Scherfig, whose previous film – An Education – seemed to have suffered similar issues.
Don’t get me wrong, there is much to admire in One Day. For example, I liked how the heroes (portrayed by Anne Hathaway and Jim Sturgess) are presented slightly differently each year, so as to create the illusion of aging. Some of it is exaggerated (e.g., young Hathaway’s glasses) but most of it is subtle enough (hair styles, clothing styles). Hathaway’s casting does attract attention: she’s one of the best actresses out there, no doubt there, but she’s the only American in an otherwise very British story. Her presence sticks out even when she speaks with a slight northern accent.
Worst scene: I do not understand why the film deviates from the book and starts with an older Anne Hathaway riding a bicycle, with the rest of the film then being a rewind. If you know the book, even ever so slightly, then that scene is a dead giveaway that ruins any chance of suspense later by forcing you to remember the ending; and if you don’t, that scene is totally meaningless.
Technical assessment:
One Day is the first proper film we get to watch after settling at our new residence, and yes – it feels good to be watching Blu-rays again, even if this one is rather mediocre in quality.
That said, this blog’s technical assessments would be put on hold for a while. There are two reasons there: due to the limitations of Australian house renting, I am unable to deploy my surround speakers and enjoy full 5.1 sound. Second, One Day has been the last movie we got to watch on the TV that served us for the past six years, the TV whose acquisition contributed to me starting this blog in the first place.
Overall: I know it’s unfair to judge a film by its book, but in One Day’s case that comparison is unavoidable. 2.5 out of 5 stars.
Posted by Moshe Reuveni at 2/28/2012 11:29:00 pm No comments:
Email ThisBlogThis!Share to TwitterShare to FacebookShare to Pinterest
Labels: Film

Lowdown: A collection of non fiction articles from a proficient futurian.

Review:
I didn’t get to a good start with William Gibson. My first attempt at Gibson-land, Zero History, turned out to be the first book I started but didn’t bother finishing on my Kindle. Yet despite the experience I suspected there is a good reason for the halo this science fiction author carries; a second chance was due, the question was what.
Into the picture steps Distrust That Particular Flavor, a collection of Gibson’s non fiction writing. It’s a smallish book, but from what I understand out of Gibson’s own introduction it encompasses all of the writer’s non fiction work, the result of his work on a genre he was reluctant to embrace.
So, what do we have on our hands with Distrust That Particular Flavor? We have ourselves some 10-15 articles grouped from sources as varied as book prefaces, music reviews and articles from magazines such as Wired. Reading these articles feels like reading an author’s blog, or for that matter my own blog: the articles vary in length, although none are particularly long; common themes, such as Japan, repeat themselves; and due to the heavy personal touch, one can learn a lot about their author by reading them.
While one cannot mistake the articles' author for not being a science fiction specialist who won his fame through futuristic depictions of the present, article topics can seem much more grounded (especially given the age of some). For example, there is the mandatory post September 11 gig and there also is an article depicting the author’s addiction to this new website called eBay. There are things to learn, such as the history of Japan and the overview of the way Singapore works, as told from a personal point of view (the latter probably qualifies as the article I’ve enjoyed the most, given the good times I’ve had at Singapore but also given the taste that place left in my mouth).
I’m afraid quality does vary, too. With some of the articles, in particular the art reviews, I had no idea what Gibson wants out of me; it reminded me again of why I dumped Zero History. Put together, the lack of a uniting theme, the varied quality and the depth of discussion reinforce the notion of Distrust That Particular Flavor being a hard bound form of a personal blog from a blog averse person.
Overall: A mixed bag of articles that, when put together, has a few more positives than negatives. 3 out of 5 stars.
Posted by Moshe Reuveni at 2/22/2012 10:52:00 pm No comments:
Email ThisBlogThis!Share to TwitterShare to FacebookShare to Pinterest
Labels: Book