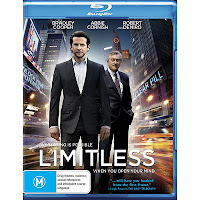 Lowdown: A mysterious drug turns a failure of a person into a mega success, but also makes him very wanted by various all sorts.
Review:
What if a silver bullet to life has been found, and you’re given exclusive access to it? That is, more or less, the question behind Limitless. Only that in Limitless’ case, it’s not you that’s given the silver bullet but rather Eddie (Bradley Cooper).
Eddie’s a total failure: he managed to get a book contract but never managed writing a word; he lives at a dump with not much hope of paying the rent; and his beautiful girlfriend (Abbie Cornish, gradually making her presence knows at Hollywood) figures him out and dumps him.
By now one can already point some issues out with Limitless. Credibility wise, are we really expected to believe a first time author would have a contract before writing a word? And cliché wise, how come all movie heroes automatically get a ravishingly beautiful girlfriend even if they are total failures? And what’s wrong with an ordinary looking girlfriend in the first place? I’ll stop the rant under the assumption my point was made: Limitless is flawed at its core with the traditional plethora of Hollywood misconceptions.
On the positive side, Limitless greatly improves from that point onwards. Our hero meets a dodgy character from the past who gives him an alleged magic pill. Eddie’s a skeptic but he tries it still: immediately, he becomes much more aware of what’s around him. The pill has made him much, much smarter: he gets his way with the landlord, he plunges right into writing his book, etc etc. In short, from a failure he becomes a success. Yet again, though, Limitless suffers a mild reliability problem: we are told the pill works because it helps one uses the brain’s full potential, given that everyone “knows” we only use 20% if that potential in our daily lives. Bullshit alert: there is no way evolution would give us a brain and then let us use only 20% of it; we would either fall victim to those that use 21% or we would be wasting vast resources on something we never utilize.
But we’ll bite the bullet and return to our hero, Eddie, whose one off pill is starting to lose its effect. The pill was so good that Eddie goes off to get some more (naturally). When he arrives at his dodgy dealer’s place he finds him dead, or rather murdered; he finds the stash of magic pills before the police arrives.
Using the pills, Eddie’s life trajectory is suddenly pointing all the way up. Alas, the drug has side effects: physical ones, like those of any other drug, and less obvious ones too. Such as the fact him having the stash of drugs makes Eddie very wanted in the eyes of many others who seek similar powers. Thus start lethal games of cloaks and daggers between Eddie and the various power hungry people in his life (including a Robert De Niro), with lots of ups and downs for all. One rule of thumb prevails throughout: he (or she) who has the pill prevails.
Taken at face value, there is not much to Limitless other than being a thrilling ride with some sort of an imaginary nature to it. If anything, the film can be accused of having the exact same structure as Megamind, a kids’ film (both films start with their hero about to die off a fall, and then flashes back). However, this perceived shallowness could also be interpreted as Limitless’ main strength in the sense that it lets the viewer ponder on the applicability of its plot to the real world. And applicability there is!
First, pills such as Limitless’ do exist. For decades now, fighter pilots have been given pills to keep them alert for extra lengths of time at the cockpit. About two years ago Scientific American published an article on the merits of pills alleged to make students smart, pondering on the merits of taking these pills before tests. The problem posed by Limitless is therefore very real, and even though in the real world it wouldn’t be one person in possession of all the pills society would still have to contend with a world in which those that can afford it will suddenly turn into much better people than those that can’t. Now that would be something to riot about!
Expanding on the allegory here, one can argue Limitless is some sort of a tale on the “virtues” of capitalism (itself represented thoroughly in the film by De Niro and others). That is, the issues facing a dog eat dog world where those with the power are the only ones to truly make choices in life.
Problematic scene: Without blooping too much, Limitless’ ending found me somewhat disappointed (and not solely due to the horrendous hairstyle Copper adopts there). Given the alternate ending on the Blu-ray, it appears the filmmakers have grappled the matter, too. I will say this: Limitless, of all films, is crying out for a dark ending.
Technical assessment: The picture on this Blu-ray is a bit of a mixed bag. The constant alterations between an oversaturated world (when the hero’s on the drug) and a more monochromatic one (when he’s off) means that fidelity is not something one could look for here. Things are good on the sound side.
Overall: Always nice to watch a good science fiction film, and Limitless definitely qualifies. I’m giving it 4 out of 5 stars, which means I have found another film worthy of a Hugo nomination this year.
Posted by Moshe Reuveni at 1/16/2012 10:49:00 pm
Email ThisBlogThis!Share to TwitterShare to FacebookShare to Pinterest
Labels: Film