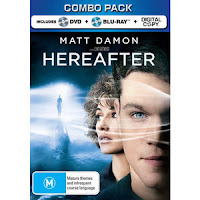 Lowdown: A woman, a man and a child from three different countries are united by the touch of death.

Review:
Given that Clint Eastwood is probably my favorite director I certainly took my time to watch his Hereafter. That is probably the result of a somewhat lukewarm reception and lack of clarity on what this film is about; in retrospect, from this side of watching the film, I can understand why.
Hereafter is one of those stories where we watch several different threads, and  as we jump from one to the other we know fully well they are bound to collide, eventually, and probably in some unexpected manner. In Hereafter's particular case we follow three different people/threads.
First we meet the famous French journalist Marie (Cécile De France). Her exotic beach holiday quickly turns sour when a tsunami hits the shores; she does her best, but the debris get her. Eventually she regains consciousness, but not before her aiders give up on her dead body. Now she is awake, but she is a different person.
Moving on, we meet George (Matt Damon) from San Francisco, a medium fully capable of talking to the dead. For real! He think his gift is a curse and avoids it by working hard at a factory and seeking human company at cooking lessons. That’s where he meets the new to town Melanie (Bryce Dallas Howard), who is there for similar reasons. However, George’s inability to avoid touching people without seeing their related dead blocks him from any meaningful relationship.
Last we have two London twin children whose single mother is a drug addict. They are resourceful in protecting their mother and covering her up from the authorities, but one thing leads to another and one of the twins gets run over. The remaining one feels compelled to access his now dead brother so he can continue guiding him through life the way he always did.
What transpires from this point onwards is a touching tale, told in the typically Eastwood-ian relaxed and considered style. The acting of all leads is great, which adds a lot to the storytelling, with cameos from the likes of Derek Jacobi making things even better. Eastwood's management of the film's international aspects, such as multiple languages, is probably the best I've ever seen. All in all, one can argue Hereafter, through its dealings with the world of the dead, is a science fiction / fantasy film with a very human story concerning the longing for an understanding soul and the human touch.
Alas, there is an elephant in the room, and that mammoth is to do with Hereafter’s treatment of the concept of death and what lies behind it. I can understand a film that invents life after death and uses it to enhance its story; that’s a typical fantasy element. However, when the film keeps on insisting that there is proof for life after death, and that the world of science is actively trying to subdue the proof in some sort of a conspiracy, Hereafter crosses a very definitive border into the land of bullshit. Again, one can argue that everything’s fair in the land of fantasy storytelling, to which I will answer back that Hereafter clearly tries to pass as a regular drama and uses arguments that many if not most of the population (but no one with a bit of science in their blood) would unashamedly regard as authentic and real. For me it was just a bridge too far, and with all the sympathy I felt for the actors I could not truly relate to Hereafter.
I can only speculate on whether Eastwood choice of making this film has something to do with his advanced age. I’m troubled by this proposition, though, because I fully wish and expect many more films to come out of Eastwood’s hands. Perhaps Hereafter is not his best film ever, but do I really want to see him making the same film again and again?
Interesting scene: The tsunami at the beginning of Hereafter is interesting. I believe this is the first time I see a complicated effects shot involving massive CGI on a Clint Eastwood film. In typical Eastwood fashion the scene is exquisitely directed: on one hand there is the general chaos all around, on the other we are fully capable of focusing on Marie’s personal struggle to survive the calamity.
Technical assessment: Eastwood’s films never achieve more than average production value qualities, and this Blu-ray is no exception.
Overall: As touching as the tale is and as sympathetic as I am to its characters, I am finding it hard to endorse Hereafter. With that in mind I'll settle for 3 out of 5 stars.
Posted by Moshe Reuveni at 1/24/2012 11:26:00 pm
Email ThisBlogThis!Share to TwitterShare to FacebookShare to Pinterest
Labels: Film