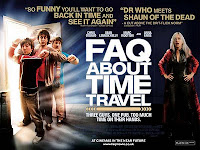 Review:
The connection between me and 2009’s Frequently Asked Questions About Time Travel (let’s call if FAQ from now on, shall we?) is easy to draw: Chris O’Dowd, star of my favorite The IT Crowd, also stars in this small time British (Irish?) production.
FAQ features O’Dowd as a useless sci-fi geek, out of his theme park job because he's scaring the kids. Together with two similarly useless mates of his they go for drinks at the pub, where things go crazy when he goes to the bar get some drinks: there he meets a beautiful girl that obviously admires him, and is probably the first to do so. She also tells him she comes from the future, which makes the whole admiration thing that much more plausible. When one of the other friends goes to the toilet he returns to find everyone dead, but also sees enough evidence to note there is something very wrong with the flow of time. Eventually the gang of three regroups, and between trips to the toilet they wage their way through this time confusion to sort things out. Maybe.
Clearly, between its subject matter and its heroes, FAQ is a geek’s film. However, that does automatically mean FAQ is a good geek’s film; not at all. Personally, I have found it more boring than amusing. Hard to believe O’Dowd’s comic talents can be so poorly wasted.
Where FAQ totally lost me, though, was the point I realized the film would never even try to bother explaining what was going on. It seemed happy to settle with taking the charade further and further, but the lack of tying things down made the whole affair feel more like a little child's lie than a film I would want to watch. From then on I couldn’t really take it anymore, and from a potentially entertaining film that failed to entertain me thus far FAQ turned into a proper bore.
Overall: I felt like Frequently Asked Questions About Time Travel was working at a level that is beneath me. 1 out of 5 stars.
Posted by Moshe Reuveni at 1/25/2012 11:25:00 pm
Email ThisBlogThis!Share to TwitterShare to FacebookShare to Pinterest
Labels: Film