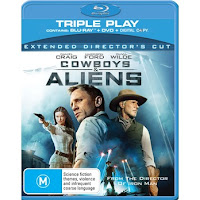 Lowdown: Wild West gunslingers pick a fight with aliens.
Review:
Without help, a good idea can only push a movie that far. Cowboys & Aliens is proof: a film based entirely on the idea of pitting Wild West heroes against space age aliens. Sounds sexy; sounds cool! In reality, though, it’s pretty boring.
The biggest problem with the premises is that it’s an unfair fight. What can a bunch of horse riders expect to achieve against monsters with lasers, hovercrafts and spaceships? Cowboys & Aliens approaches this problem rather non creatively. It starts through the utilization of star power (Daniel Craig as the star, Harrison Ford in the uber supporting role). Then it cheats by starting the film with Craig sporting a magical bracelet on his hand, a bracelet that can fire grade A lasers capable of turning mean aliens to fodder. Can that bracelet be used to tilt the odds in favor of us humans? Can a cowboy ride a horse?
The beginning of the film’s Craig doesn’t remember who he is or why he is in the middle of the desert with a weird bracelet he can’t shake off on his hand. He quickly learns he’s a mean killing machine when three passer byes pick on him; he “borrows” one of their horses and lets the rest go in a manner quite atypical to the era where a horse was worth quite a lot but also a manner that repeats itself throughout the film. He then makes his way to the nearby town where all sorts of villains lurk around all sorts of good guys. I'm talking about guys like a Sam Rockwell, playing a role where his talents are totally and shamefully wasted on a minor role.
While Craig is busy learning his true nature as a wanted criminal, business as usual is interrupted when a bunch of hovercrafts attack the town and lasso some of its occupants away. The film's title gives away the baddie behind this foul did; it takes a group of our heroes to figure this out and attempt a rescue of the abductees, on the way turning the flock’s baddies into either bodies or goodies.
The number one problem with Cowboys & Aliens is not its predictability, nor it resorting to the stereotypes one has been trained to expect in a film such as this (token female characters, the lot). No, the number one problem is length: we watched the Blu-ray version that claims to be “extended” (it was the only one on the disc), but I would say the film would have greatly benefited if it was to be given an hour's worth of trimming. There is simply not enough action in between boredom to keep the viewer entertained and distracted from the silly crap the film has too much of, with the result being simply that – boredom.
So then the next question is, what are all these stars doing in such a crap film? Sadly, this question does not receive an answer. Indeed, if there is anything I took from watching Cowboys & Aliens, it’s how a mediocre treatment can ruin seemingly promising potential.
Technical assessment: As expected, Cowboys & Aliens is a good Blu-ray. The picture does suffer from scenery that doesn’t look as real as it should in the name of looking arty, while the sound is exactly what you’d expect from the genre and the budget of a film yielding star power of this caliber.
Overall: Proof that a film cannot rely on being built around a good idea, no matter how good that idea is, when there is no decent plot and decent characters to support it. 2 out of 5 stars.
Posted by Moshe Reuveni at 12/19/2011 11:13:00 pm
Email ThisBlogThis!Share to TwitterShare to FacebookShare to Pinterest
Labels: Film