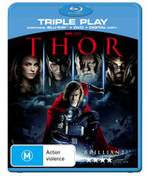 Lowdown: A clash between Norse gods reaches the earth.

Review:
A necessary precondition for watching Thor is shutting one’s brain. Once that is achieved, some fun can be had from the rollercoaster of special effects' action scenes Thor brings forth.
Based on a Marvel comic, Thor takes place at two realms and follows two main characters, one of each realm, as it moves back and forth between realms and time lines. First we have the realm of the Norse gods, ruled by Odin (Anthony Hopkins), where old conflicts are being revived and the prodigal son Thor (Aussie Chris Hemsworth) is found abusing the powers of his magical hammer by warmongering. Odin casts Thor to the earth, where aside of his body builder’s body and godlike English dialect he is powerless.
In parallel we have the film’s second realm, the earth, where we follow physicist Jane (Natalie Portman) as she investigates the weird phenomenon that us smart viewers know to be the portal that brings entities from the gods’ realm to the earth and vice versa. The key question turns out to be whether Thor can redeem himself and settle things in both realms, and the answers are as predictable as ever (like, guess who’s getting the girl?).
There is nothing special to Thor as a film. It is nothing more than a special effects’ extravaganza, and as long as you remembered to switch your brains off you will not be offended with the gruesome way in which Thor explains to Jane the physics behind the phenomenon she’s investigating. Where Thor does stand mildly above the rest of the typical "too high a budget for its own good" blockbuster is in the direction work:  Kenneth Branagh is at the helm here.
Branagh and Shakespeare go together like humus and pita, but what the hell does the former do with silly action material? I don’t know, but the result speak for itself. Between frame composition, look and feel as well as editing, Branagh has clearly managed to put some certain extra qualities to Thor that give it a cut above the rest. Mind you, he still handles most action through shaky cameras and faster than light editing, both approaches I quite dislike.
Worst scene: Why is it that every Marvel based comic film now has to include a strange and otherwise unrelated scene featuring an eye patched Samuel L Jackson? At least Thor’s takes place after the end credits.
Technical assessment: This is a Blu-ray to shock and awe with. The picture is good, even if it has the occasional artifact, but the soundtrack could easily knock down flimsy construction work.
Overall: It’s silly, but a bit better than average. In the context of silly summer blockbusters Thor gets 3 out of 5 stars.
Posted by Moshe Reuveni at 11/07/2011 10:30:00 pm
Email ThisBlogThis!Share to TwitterShare to FacebookShare to Pinterest
Labels: Film

Jackson is recruiting superheroes for a joint taskforce to fight evil.

Check out The Avengers entry on imdb for details.

It wasn't a serious question: I just don't see the point of it. In other words, do your teasers the old fashioned way!

I wish you'd have told me to shut off my brain before I watched it. Bleh. It looked kinda cool at points, but I found the movie itself, for the most part, laughable.

Glad you got more out of it than I did...

I would suggest you wait to read my review next time around.