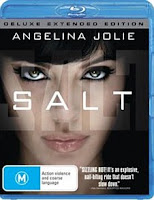 Lowdown: A female CIA agent with James Bond like talents needs to prove the hard way she is no Russian traitor.

Review:
At the end of its hour and three quarters, the best thing I could say about Salt is pay tribute to it casting a female in the role of the ultimate action hero. Angelina Jolie’s Evelyn Salt looks and feels like someone who would flick James Bond aside the way we do a fly. But is that all Salt has to offer us?
Salt is a ruthless and devoted secret CIA agent. We know this because the film starts with her being held captive at North Korea and not breaking down despite all the torture inflicted on her (while, it has to be said, she is wearing nothing but fashionable lingerie; I guess the North Koreans are not the ruthless torturers we imagine them to be). She’s freed through a prisoner exchange and comes back home for her day job, where – suddenly, out of the blue – this Russian accented guy who claims to be a defector comes in and claims she is a Russian agent. Could that be? Her colleagues don’t want to take any risks, with the Russian Prime Minister in for a visit and a lingering threat of an assassination attempt on him. Our Salt has to take matters into her own hands, literally, escape her mates and prove herself right.
What follows is an action filled film featuring countless death defying stunts and thrills. Salt does a pretty good job in the action department; unlike most of its competition, digital effects and various other means work. It really is easy to believe it's Jolie that’s jumping from the top of one truck to another that’s on an entirely different freeway and heading in the opposite direction.
The problem is not in the action, the problem is in the plot. Essentially what we have on our hands here is a drama similar to Kevin Costner’s No Way Out: you don’t know whether the hero is a Russian or not, and indeed – you’re kept guessing who the goodies and the baddies are in the first place. While No Way Out was a drama, Salt is an action piece, and it takes its cues from the likes of Call of Duty - Modern Warfare. I shit you not, there are elements in Salt that are borrowed one for one. Thing is, the Modern Warfare series may be a great video game series, but it is not known for its plot. Credibility and reliability suffer, to say the least – and as a result of inspiring Salt, credibility and reliability greatly suffer in the latter, too.
The result? You watch Salt and you’re thrilled, but the minute you start thinking of what led to what you start getting a headache. When truths about characters are finally exposed it gets even worse, because it becomes retrospectively clear that none of them has acted in their own best interests; they acted in what the viewer perceives to be their best interest at the time when the viewer did not know everything there is to know about them. And that, ladies and gentleman, does not make sense.
Aussie director Phillip Noyce (Rabbit Proof Fence) has delivered plenty of action films in his career (Patriot Games, Clear and Present Danger). They’re all slick, but they’re all suffering in one department or the other. Salt’s the same. It's a shame: Noyce is obviously quite talented, as films like The Quiet American unequivocally prove.
P.S. I admit to be puzzled by the film’s name. I’m unable to think of a worthwhile reason for calling the film Salt, other than it being the heroine’s name. Is it that the studio is planning to release a sequel called Pepper?
Best scene: Salt’s husband is being slowly killed in front of her in order to test her loyalties. Jolie can act, we know that already.
Technical assessment: A pretty spectacular Blu-ray with enough explosions to destroy any good feelings your neighbors might have hold for you and your home theater.
Overall: Good and bad at the same time, but entertaining nevertheless. I would place Salt somewhere between 2.5 to 3 stars out of 5.
Posted by Moshe Reuveni at 11/23/2011 11:20:00 pm
Email ThisBlogThis!Share to TwitterShare to FacebookShare to Pinterest
Labels: Film

Unfortunately I felt cheated by the half hour mark. Jolie had been doing some good stuff before this one - it had too many plotholes which they tried to cover with explosions! :)