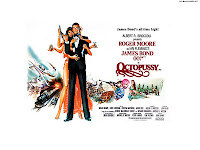 Review:
By far the most important impact Octopussy has had on my life is to do with it being the only James Bond film I watched at the cinemas together with my uncle. It is worth mentioning because during those years I used to visit the cinemas about twice a week with him, yet the rest of the Bonds turned out the exceptions. That is, the few films my parents did attend with me were the films they had personal interest in rather than them wanting to spend quality time with their child.
Other than that there is not much for me to add about Octopussy, the 1983 incarnation of Roger Moore in the role of Bond, James Bond. It is fairly similar in character to its predecessor, For Your Eyes Only, in themes and style (not that big a surprise, given they were both directed by John Glen).
Octopussy does suffer in the script department: its story feels as feeble as a story could get, with a plot that ranges from an evil plot by an aspiring Soviet general, fake Fabergé eggs and other jewellery heists, to the woman smuggler lending the film its name: the woman reigning over a cult of woman running its own island, Octopussy (Maud Adams) provides Bond a target for his chauvinistic charms this time around.
What saves the film are its action scenes, in particular the race to dismantle a ticking atomic bomb at the core of a circus act. It’s a pity we don’t see classic action stuff like this anymore; today's action is synonymous with over the top CGI and shaky, nausea inducing camera work.
Best scene: Bond’s crocodile shaped personal submarine was the household four year old’s favorite.
Overall: Thin on most departments other than the action, Octopussy lies somewhere between 3 and 3.5 out of 5 stars.
Posted by Moshe Reuveni at 11/17/2011 11:33:00 pm
Email ThisBlogThis!Share to TwitterShare to FacebookShare to Pinterest
Labels: Film