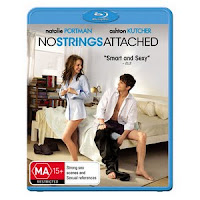 Lowdown: A guy seeks a relationship with a girl who is only interested in the sex.

Review:
Much an ink and many a film were dedicated to answering an old age riddle, whether two people can have a sexual relationship without a proper relationship attached. The question is well related to the one on whether a man and a woman can ever be “just friends”, as per Harry and Sally, as seen by the fact seems to always answer both questions with a resounding “no”. Taken in that context, No Strings Attached is just another patronizing film presenting the conservative agendas of Hollywood, only it is worse than most because it points the finger towards the younger generations and their “twisted” way of relating with one another.
Adam (Ashton Kutcher) and Emma (Natalie Portman) have known each other since they were kids. At the present time Adam is lamenting his breakout with a dumb but beautiful girl, which is when he bumps into Emma yet again; only she’s no child anymore, she’s a busy medical intern with no time for nonsense but definitive needs of the physical kind. The two agree to a relationship that is nothing more than your basic supply and demand sexual relationship. There is a twist, though: in contradiction to conventional stereotypes, it is the male that wants to turn this affair into a proper relationship and the female that doesn’t. Who will prevail? One only needs to remember we are talking here of a Hollywood production to figure out how this one is going to end and what should constitute a happy ending if Hollywood has its say.
If attitude and template like structure weren’t bad enough already for No Strings Attached, boredom presented itself as by far its biggest problem. Although only slightly longer than 90 minutes, I found myself struggling to keep awake at this lingering and pointless torture. Slight salvation was provided by Kevin Kline (didn’t recognize him at first!), to whom the best and probably only joke belongs. Then there was a surprise realization that it is non other than Cary Elwes himself that I was seeing performing a very minor role.
I was never one of director Ivan Reitman’s biggest fans. Even Ghostbusters was far from triggering many laughs. With No Strings Attached, however, he seems to have sunk to an all time low. At the end of the day, I will remember No Strings Attached for nothing but the shameless product placement for Apple products this film reeks of.
Worst scenes: I can relate to Portman not wishing to appear nude on film; that’s perfectly within her rights. I do question the casting decision to put her of all people at the center of a film about sex, because No Strings Attached’s sex scene all looked terribly contrived and unnatural with clothes on.
Technical assessment: A fair Blu-ray, given genre and all.
Overall: Sorry, but I have found No Strings Attached quite an annoying waste of time. 1 out of 5 stars.
Posted by Moshe Reuveni at 11/01/2011 02:59:00 pm
Email ThisBlogThis!Share to TwitterShare to FacebookShare to Pinterest
Labels: Film