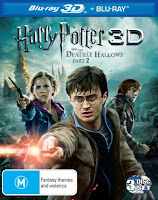 Lowdown: The end of Harry Potter.
Review:
Harry Potter and the Deathly HallowsPart 1 had the unenviable job of setting things up for Episode 8, the culmination of the Harry Potter series. In my opinion it failed because it was too busy in the setting things up department to act as a worthwhile film by its own rights. The question now is, how good is Part 2? Was it worth the wait?
Well, Part 2 does not wait for you to ask any questions – it just streams into action from the minute your Blu-ray player allows you to start watching the film (which, as people experienced in the Blu-ray experience would tell you, can take a whole lot of rather too long moments to get to). Right there is my first complaint at the film (as opposed to the Blu-ray format): it is pretty unforgiving to those of us who do not recall exactly where things were left off by Part 1 or, for that matter, do not remember many other fine details from previous episodes.
The plot of Part 2 centers around a Voldemort that’s finally making real moves in the real world to establish himself (the question of what he’s trying to establish himself as is left rather ambiguous). On their part, Harry Potter and his gang are out to search and destroy the various bits of his soul and thus, eventually, kill the menace once and for all. As with the book, any attempt at a worthwhile plot is held back by attempts to seal loose ends from previous episodes, but still leaving the more curious viewer with plenty of unanswered questions. As with previous films in the series, events are piled up one of top of the other in a manner that is hard to follow (unless one is fluent with the books); it feels as if the script was written with a checklist of scenes to cover in mind.
That said, there is a lot of intensity about Harry Potter and the Deathly Hallows Part 2. That is to say, there is a lot going on here in the action department, so most of the time you wouldn’t really stop to think about the plot but rather find yourself tossed from one rollercoaster to the other. Things culminate with the battle for Hogwarts, which is portrayed in a manner not unlike World War I films or footage depicting the evils of Nazis.
Worst scenes: One of the Harry Potter series’ trademarks has been the sporadic use of the best of British acting talents. This happens again, but the sporadic-ness is even more extreme with the likes of Emma Thompson or Miriam Margolyes having such marginal roles it’s a shame to have them waste their time on this project.
Technical assessment:
As with Part 1, Part 2 totally overwhelmed my LCD rear projection TV’s ability to render a picture worth watching by over challenging its black level rendering. I know I’m due for a new TV, but I would like to challenge the artistic reasons behind the creation of such a dark pair of films here. The real world, even when in dire straits, is not as bleak; not even holocaust movies go that far.
As for the sound department, this Blu-ray performs as expected to deliver a very solid presentation.
Overall:
Harry Potter and the Deathly Hallows Part 2 is the best of the more recent Harry Potter films by virtue of the density of its activity levels. There aren’t many boring parts here! On the other hand, it is a far cry from the charm of the first films, where magic was more than adequate substitution for guns and bullets, as it is here, not to mention the charms of the books. I’ll put it this way: no one would be excited about Episode 8 of the Harry Potter series if it wasn’t for its prequels. Indeed, as I have been arguing for a while I do not think the films would have created as much excitement as they did if it weren’t for the books.
Which is my way of saying that as a whole, the Harry Potter film series is nothing special. This particular episode just manages to scrape the bottom of 3 out of 5 stars rankings. I consider series' third instalment, The Prisoner of Azkaban, to be the best of the lot by a wide margin.
Posted by Moshe Reuveni at 11/29/2011 11:08:00 pm
Email ThisBlogThis!Share to TwitterShare to FacebookShare to Pinterest
Labels: Film

don't look now, but there are ads in your blog.

I was curious to see the formula Google uses to give away money for page views, so I activated ads for one night. It seems like $0.02-0.04per 100 views (and it's interesting to note there were no clicks).
The next day I removed the ad widget but then noticed that Google insisted on keeping ads at the end of the posts (something I did not ask for!). I know how to get rid of them, but decided they're unobtrusive enough to keep them going. The next day (today) I've decided that enough's enough - it's not like these ads will make me rich.