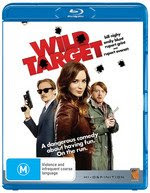 Lowdown: A hitman falls for the woman he’s supposed to kill.
Review:
We’ve seen that movie before in various guises: of all the people a guy should fall for, he falls for the one he’s forbidden to fall for. I suspect the formula was old at the time Shakespeare wrote Romeo and Juliet, but as far as I’m concerned the formula was never as fresh and as entertaining as it is with Wild Target.
Victor Maynard (Bill Nighy) runs the family business and has been running it very successfully for years. It’s at the top of its industry, actually, which is fine as long as you don’t mind it being a hitman’s service. The secret to Maynard’s success is in his lack of emotional involvement with anything in life, or rather anything other than his possessive mother.
On the opposite side we have Rose (Emily Blunt), a kleptomaniac who goes a bit too far and steals from Ferguson (Rupert Everett). The latter, being an ex real estate agent, won’t lie down; he hires Maynard’s services to take care of business. Instead of doing what is expected of him, what he's always done, Maynard trips; for the first time in his life he feels love. Thus instead of killing Rose he ends up protecting her, with the aid of a nobody they stumble upon on the way but which Maynard suspects to have true hitman potential (a Rupert Grint that’s probably working hard to shake the image of Harry Potter’s Ron from the rest of his acting career).
Into the picture steps Dixon (Martin Freeman), the hitman hired by Ferguson to finish the business off. Dixon is and has always been the second best, but does he stand a genuine chance with Maynard going off his rails? And does Maynard stand a chance with Rose in the first place?
As mentioned, there is nothing here we haven’t seen before. Yet despite the obvious lack of Hollywood grade budget, Wild Target is hilarious and fresh. Correction: it is incredibly hilarious and fresh. So how does it manage to pull the trick?
I think it is safe to say it starts off with a very cleverly written script, the type that can take a well versed story and make it sound smart and original. As much as I credit the script, though, I will give most credit to the cast. This all British cast is simply wonderful through and through: I don’t need to waste words on Nighy’s talents (he’s the reason I wanted to watch the film in the first place), but Emily Blunt, whom I recently fell for in The Adjustment Bureau, proves the latter was no fluke; she is an extremely talented actress, and like the polished Nighy she has great comedy talent in the timing department. There’s no point in spending words on Everett or Freeman’s talents, so let’s not do that, but I will add that Grint, seemingly the weakest link in the chain, is far from failing this affair.
Further credit goes to director Jonathan Lynn. To be honest, Lynn’s previous direction work did not capture me (e.g., Clue); to his credit, though, Lynn is one of the main men behind Yes Minister and Yes, Prime Minister. That is, he knows his way around comedy, and this time around he applies his knowledge very well. The result is an exquisite and unassuming delight, a grand way to spend the night at home with a Blu-ray.
Best scene: To give you a fine example of how scenes can be made effective without splashing much cash, Wild Target features a car chase that has the camera stationary and set wide in front of a narrow lane. The lane itself occupies a small part of the screen's width. Enter the action: All we see is the occasional goodie/baddie car zooming across the narrow lane from one side to the other for a brief second, going almost unnoticeable. Add some funny sound effects and you have a very entertaining car chase on the cheap!
Technical assessment: The picture on this Blu-ray looked very natural to me and devoid of any blemishes. The sound department was rather too subtle, but sound is cleverly used throughout for great effect.
Overall: Delightful British humor makes Wild Target one the most enjoyable film I’ve seen in months. 4.5 out of 5 stars.
Posted by Moshe Reuveni at 10/24/2011 11:19:00 pm
Email ThisBlogThis!Share to TwitterShare to FacebookShare to Pinterest
Labels: Film

Sorry.
I was experimenting with Google's new dynamic templates. By the time I concluded these are not ready for prime time yet I was too tired to seek a proper template.
Hope the current one is better.

P.S. Back in the days of CRT, reading from a dark background was easier on the eye...

I'll take your word for it.

But until your blog is available on Kindle, I don't think you should can improve the eye strain with a color change.