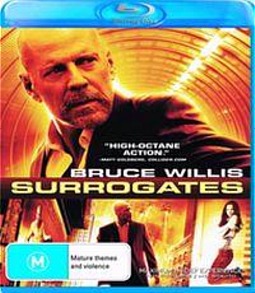 Lowdown: A society where people have been replaced by robot surrogates is forced to rethink its ways.
Review:

We live in a society where more and more of us find it easier to get absorbed in our own virtual worlds than it is to interact with the people around us. I started noticing the phenomenon when iPods became popular and people around me enclosed themselves in their own little worlds. Matters further developed with the proliferation of the smartphone. I am not immune myself: I interact with my friends through the virtual world much more than I do in the read world; I even have friends, good ones, whom I never physically met. Now, take this trend forward and imagine a world just like ours, but where all human interaction has been totally replaced by surrogate look-alike robots operated by their human owners from the depths of their dark bedrooms. The world you would imagine wouldn’t be too dissimilar to the world depicted by 2009’s Surrogates.
Is this the eutopic world we should aspire to, a world where everyone looks beautiful (all the robots are designed to look young and attractive), where everyone is unnaturally powerful, where accidents and crime never have an effect? Police detective Tom (Bruce Willis) is not convinced; perhaps it is because he and his wife (Rosamund Pike) did lose a child. An incident where the son of the guy who invented the surrogates (James Cromwell) is killed in bed when his surrogate is attacked, many a kilometer away, does convince him something is wrong. It unravels a major weakness in this whole surrogates affair: if one isn’t safe using a surrogate then what is the point of having a surrogate in the first place?
The problem is that this new weakness of the surrogate based society is too big to be accepted; society is too dependent on surrogate technology. That is why Tom sets out to investigate matters with his partner Peters (Radha Mitchell). Awaiting them is an action adventure with some interesting and thought worthy ideas.
There can be no doubt that Surrogates was heavily inspired by Asimov. The whole concept of a society of people avoiding physical contact and relying on robots was thoroughly explored in books like The Naked Sun; just replace Solaria’s robots with the surrogates, replace the uncomfortable detective Elijah Baley with Bruce Willis, and do the same to the supporting characters. Oh, you can keep James Cromwell doing the exact same role he did at I, Robot; matter of fact, you can keep a lot of the designs from I, Robot, too.
On paper, a film that celebrates Asimov’s ideas should be a film I love. Let the record show I regard The Naked Sun as one of the best books I ever read. However, Surrogates does not reach the peaks Asimov does in his books; it’s not a bad film, but it fails to soar.
One can probably start the blame game with director Jonathan Mostow, who – as with his previous films (U-571, Terminator 3) has a knack for taking highly potent concepts and manufacturing uninspiring results. There are also script weaknesses here and there, things that don’t make sense, stuff that works for the goodies but not for the baddies, and other sorts of small touches that good science fiction films do well to avoid but the lesser ones seem to drown in. Even the basics are flawed: I can understand why people hide in their bedrooms, but why do they have to look so wrinkled and dead like as they do in Surrogates? Things like that just break the suspension of disbelief.
Add to that the excessively strong anti progress and anti technology atmosphere that Surrogate seems to preach. Asimov, in contrast, wrote books where technology wasn’t the enemy but rather pointed at issues with the way technology is implemented. I therefore argue that Surrogates is wasted potential. It’s a waste of a good story and a waste of some good actors’ talents (cough Rosamund Pike cough).
Best scene: The scenes of mass surrogate “deaths” are quite spectacular. Them being set in a modern day city, rather than a futuristic one, renders the scenes so much more effective.
Technical assessment: Again we have to suffer deliberately matted colors in an otherwise good Blu-ray.
Overall: Surrogates is an interesting watch at 3 out of 5 stars. It could have been so much more, though!
Posted by Moshe Reuveni at 10/05/2011 11:09:00 pm
Email ThisBlogThis!Share to TwitterShare to FacebookShare to Pinterest
Labels: Film