Robots and Empire by Isaac Asimov 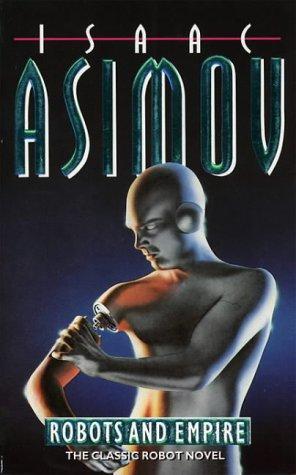 Lowdown: Two robots find themselves in the thick of galactic power struggles.
Review:
Isaac Asimov is probably the most important author of fiction in my life and certainly one of my all time favorite authors. His most famous series of books are the Foundation series and the Robot series. Of these, it's the Robots happen to be the bread and butter of the books I grew up on, and of these the series of books starring plainclothesman Elijah Baley are probably my all time favorite series of science fiction work. Those books started with the Caves of Steel, moved on with The Naked Sun, and much later had Asimov write a couple more: Robots of Dawn and Robots and Empire, which represents the beginning of Asimov’s attempt to link his Robot world with his Foundation world.
Regardless of where Robots and Empire stands, the book started off in a very favorable position with me: although it does not feature the character of Elijah Baley anymore (other than in mentioning and in the occasional flashback), it does sport my favorite fictional robot: the more human than human Robot Daneel Olivaw, Baley’s former partner detective. Plus it features a robot that quickly grew up on me, the elusive but quite non human Giskard. As far as I’m concerned you can keep your C3PO and R2D2 to yourselves; these two are the real thing.
So what are my robots up to this time? Taking place some two hundred years following Robots of Dawn, Robots and Empire takes place in a world where humanity is divided in two: there are the Spacers, made of humans that left earth eons ago, settled some fifty planets and then settled down into a sedate lifestyle featuring an average longevity of some four hundred years and multitudes of robots looking after people’s every needs. On the other side there are the people of the Earth, living their short lives in their caves of steel, but – as a direct result of Baley’s efforts back in Robots of Dawn – also free to settle planets of their own, thus spawning the Settler: a human not afraid of venturing and the tough life that venturing brings. Oh, the Earth side of the equation does not like robots.
In this world we are reintroduced to Gladia, the subject of Baley’s detective work in the two prequels, a middle aged Spacer (two hundred years plus old). Her tranquil and frankly boring life is interrupted when she is asked to accompany a Settler to Solaria, a recently abandoned Spacer world, by virtue of her potential familiarity with the world (Gladia, as readers of the series would know, came from Solaria but left it for ). For reasons the elude even her Gladia embarks on this quest, accompanied by her principle robots – Daneel and Giskard.
It is the latter two who are the true heroes of the book. This time around it is Daneel who assumes the role of chief detective, previously reserved to Baley. By applying Baley style logic and lots of very philosophical thinking, heavily influenced by Asimov’s famous three laws of robotics that are embedded into them, our robots realize they are in the middle of a conspiracy that could shake the balance of power between Spacer and Earthman, cause lots of human misery, and thus affect the robots' ability to conform with the first law of robotics (“A robot may not injure a human being or, through inaction, allow a human being to come to harm”). With that in their minds, our robots embark on a quest of their own, a quest that has them constantly in the shadows of their human masters but, in effect, has them running the show. Or, to tie things with the Foundation series, it has the robots slowly establishing the groundwork of psychohistory: Asimov’s idea of a science that could allow the future history of humanity to be calculated and manipulated.
I couldn’t avoid marvelling at every passage in Robots and Empire. Asimov’s lovely game of introducing us readers to a situation and then having that situation methodologically analyzed by his robots is pure delight as far as philosophical exercises go; I could not avoid trying to read the book slowly so I could prolong the pleasure. There is the over reliance on moving back and forth through time in order to keep the suspense going and there is that certain artificiality that comes with forcibly, albeit delicately, trying to tie the robots world with the Foundation world. I was perfectly willing to forgive Asimov for those minor issues, though; my constant marveling at the careful way in which my favorite robots unravelled what the essence of being human is covered all blemishes quite sufficiently.
Overall: Asimov is definitely my favorite. 4.5 out of 5 stars.
Posted by Moshe Reuveni at 10/13/2011 11:36:00 pm
Email ThisBlogThis!Share to TwitterShare to FacebookShare to Pinterest
Labels: Book

This was the first English book I all night, and I didn’t even finish it by morning.

I was very tired at school that day.