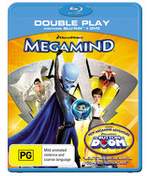 Lowdown: A baddie superhero is forced to reconsider his ways.
Review:
Most films’ heroes are good guys. That’s perfectly natural given that it’s much easier for audiences to identify with a goodie. What if a film was made where the baddie was the central character instead, grabbing the majority of the crowd's attention? One can argue some of the Batman films already went in that direction, but Megamind does so much more conclusively. That is, if you take into account the fact Megamind is a computer animated film aimed at children, where being a baddie is not necessarily that bad to begin with.
Megamind (voiced by Will Ferrell) and Metro Man (Brad Pitt) both start off as the sole baby evacuees off neighboring planets as they (the planets) are swallowed by a black hole. Both land on earth, but Metro Man’s baby capsule lands at a rich family’s mansion while Megamind lands at the middle of a jail. The two grow up in their respective environments and both have special powers: Megamind is a brilliant evildoer, and Metro Men is the Superman like superhero who defends from the evil of Megamind. The pattern repeats itself over and over: Megamind plots, Metro Men defeats him.
Things change when Megamind plots to destroy Metro Man on the  grand opening day the of the museum ’s people dedicated to their devoted superhero. Megamind starts by kidnapping Roxanne (Tina Fey), a news anchorwoman perceived to be Metro Man’s girl, and holds her hostage. Then – for the first time ever – he actually manages to kill Metro Man. What is Megamind to do now his nemesis is gone, though? On one hand he is free to do as he always wanted, on the other his life has just lost its entire meaning.
Megamind therefore plots to create a new superhero to counter him, and through one coincidence or another that honor falls on the shoulders of Roxanne’s cameraman, Hal (Jonah Hill). Things don’t go according to plan, though, and Megamind realizes that the recipe for a fulfilling life might lie in being less bad and more of a friend (and lover).
Directed by Tom McGrath, who brought us what are probably my four year old’s favorite films at the moment – and 2 – Megamind’s mix of aliens, weird and inventive robots, and a smooth plot proved to capture this household toddler’s heart. During the course of a Saturday and a Sunday my son watched Megamind four times. I guess that rests the movie’s case, doesn’t it?
Personally, I liked Megamind’s music track the most. Things start off with George Thorogood’s Bad to the Bone, an old favorite from my favorite film. There is even an orchestreal version of the tune escorting the rest of the film, but then there are also delicately placed gems from AC/DC and Guns N’ Roses.
Best scene: My son liked the giant robot Megamind is driving/flying the most. Because it’s a giant robot.
Technical assessment: As per the general standard for computer animation A list films, Megamind is a spectacular Blu-ray. The soundtrack even features 7.1 channels!
Overall: Everything you can expect from a child friendly computer animated film. 3 out of 5 stars.
Posted by Moshe Reuveni at 10/04/2011 11:10:00 pm
Email ThisBlogThis!Share to TwitterShare to FacebookShare to Pinterest
Labels: Film