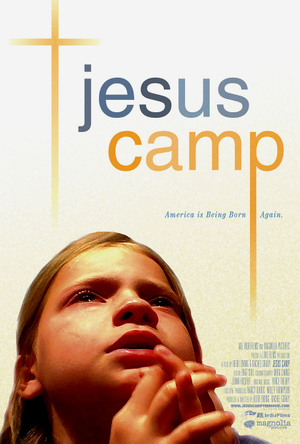 Lowdown: Following specific American children being indoctrinated with evangelical Christianity.
Review:
Given my personal opinions on matters of religion, 2006's Jesus Camp was a documentary I wanted to watch for a few years now. ABC gave me the opportunity to do so recently. In actual fact, they've opened a brand new movie watching world for me with Jesus Camp, for that particular film ended up being the very first film we watched via Internet streaming. We watched Jesus Camp through ABC's Australia only iView website playing on our PlayStation3; at 400mb for an hour and a half long film quality was wanting, but at least we did not have any reception problems (the reason why we went to iView in the first place).
Technicalities aside, Jesus Camp is a documentary that is aiming to communicate the phenomenon where little American children are being indoctrinated to the evangelical stream of Christianity. According to Jesus Camp, there are 80 million evangelical Christians in the USA today (out of a population of some 300 million), and their numbers are growing; Jesus Camp tries to expose the fabric of that group's being to the rest of the world. The exposure is done by exposing the viewer to two disagreeing opinions.
On one side we have a radio presenter presenting himself as a sane Christian and a typical American. The guy is afraid/worried about the evangelical movement, to the point of not hesitating to open his mouth and say what he thinks. On the other hand, and through the film's majority, we watch a select few children as they go through evangelical indoctrination: from home schooling with their parents telling them that science is bad and that global warming is a vicious lie, to the even more extreme case of children camps with a condensed agenda of imprinting the children with the evangelical agenda.
The beauty of Jesus Camp lies in it not taking sides. Personally, I consider that radio presenter to be a bit of a religious nut, which meant that the scenes from the children camp were utterly terrifying depictions of first rate child abuse. However, I suspect that when seen through the eyes of an evangelical Christian they might consider perfectly natural and even positive. As hard as it may seem to me to see those scenes in a positive light, my personal encounters with evangelical Christians at the office have led me to understand that anything is possible when it comes to the extremes religion can take otherwise ordinary people to.
That said, there can be no denying that those indoctrination processes are objectively horrible. Even if you do not count making children cry and suffer in order to indoctrinate them a bad thing, surely lying to children is a bad thing. When you tell a child they have to be on Jesus side, whatever that means, because children in Palestinian schools are being taught to become suicide bombers, then you are lying. First of all, there is no country called Palestine; there is the West Bank and the Gaza Strip [for the record, if it was up to me there would have been a Palestinian state for many years now]. Second, as someone relatively familiar with this subject matter, I can attest that while I am very worried about the hatred many Palestinian children are being indoctrinated with, none of them are actually brought up to be suicide bombers. Besides, the argument that global warming is a left wing conspiracy is the product of lunacy; the fact there is a solid link between global warming denialism and religion speaks loudly against the virtues of the latter.
By far the most important question raised by Jesus Camp is to do with the right of parents to indoctrinate their children with whatever beliefs they may hold. Jesus Camp makes its point by showing us what can happen at that extreme when there is nothing to hold parents back with. Personally, I value the truth the most, and as truth I define the things that we have evidence for; in effect, those are the things with confirmed scientific theories. No religion has any proper evidence supporting it (for example, any evidence that a member of another religion will be forced to accept), therefore no religion cannot claim to be true. Given this universal truth, I am of the opinion that the indoctrination of children with religion, whether through their parents or through the state, is a crime committed against the children. That is why I am against special religious education classes in Australian state schools and why I am against state sponsored chaplains roaming our schools under the guise of professional consultants. Jesus Camp proves my point by showing what the other side's logic can do when taken to the extreme.
That said, some clarification is required concerning the nature of the crimes. In today's world, the majority of human parents are too ignorant to know any better than to pass the religious beliefs their parents dumped them with onwards; one cannot expect these parents to teach their kids about science. I suppose this only goes to show that human civilization still has a long way to go in its improvement path. The first steps to be taken, as far as I can tell, should be taken by the state ensuring its education system is worthwhile; alas, what we are seeing in the USA, where the denial of both evolution and climate change is rampant, is rather worrisome. Sadly, Australia seems to be playing "follow the leader" there.
Best scenes: Any of the scenes where the children cry as they suffer in the way Jesus supposedly did.
Overall: An interesting documentary that is definitely worth viewing. 3.5 out of 5 stars.
Posted by Moshe Reuveni at 10/17/2011 11:50:00 pm
Email ThisBlogThis!Share to TwitterShare to FacebookShare to Pinterest
Labels: Film

do you get that a lot, or just for posts with Jesus in the title?

Happens occasionally. Usually it's on the last post (as with this case); other times it's someone putting the same message several times. Google has a spam filter that's pretty good at blocking the majority, though.
To answer your specific question, the post's topic rarely has much to do with it (case in point, Jesus Camp and Melbourne real estate).