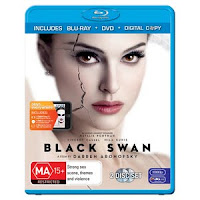 Lowdown: The struggle of a promising dancer to star in Swan Lake.

Review:
I am well aware of holding a minority opinion here, but I cannot say I like director Darren Aronofsky’s work. There are the films I detest, like The Fountain, and there are films like The Wrestler that I consider alright despite the director and not because of him. Black Swan belongs to the latter: a fine film that, in my opinion, could have been much better done under the helm of a director less interested in generating an aura of mysticism.
Black Swan is dominated by Natalie Portman’s performance of Nina, a ballet dancer with much potential that never really rose to the heights required to make her the star of the show. We quickly find out Nina’s constantly held in a childlike state by her possessive mother (Barbara Hershey). Mother is not Nina’s only problem: there is a lot of competition and jealously between the various members of her big time New York ballet band. Notable band members include a Winona Ryder representing the now too old queen of the ballet for whose position the others are fighting, and a Mila Kunis representing Nina’s chief opposition: not as technically capable as our Nina, but full of some elusive dark spirit that turn her performances into passionate ones.
Into this mixture enters Thomas (Vincent Cassel, one of the rare examples of French actors I could never stand) as the band’s artistic director on the lookout for the new star on his next project – a bare naked production of Swan Lake. Competition ensues, and Nina finds she has to deal with her “inner-self” problems if she wants to make the cut and turn into the band’s new queen.
The real story behind Black Swan is not the story of Swan Lake’s production but rather the story of how the truly devoted artist becomes the art they are trying to produce. As in, there is a part of us in anything we produce, but there is a lot of us in the stuff we are passionate about and make true effort at. Without blooping too much of Black Swan, the film makes its point by drawing parallels between the story of Nina’s own life and the story of Swan Lake. My personal problem with Black Swan is to do with the technical methods in which these parallels are made: Aronofsky does not shy from scenes where the camera moves and shakes so badly I almost wanted to throw up; he does not shy from cheap “make you jump” moments that one expects to find in B grade horror flicks; and he seems to love sticking in all sorts of mysterious and incomprehensible scenes in between. True, some of those turn out to make some sense later, but it cannot be said I like the technique; I don’t like being toyed with just for the sake of the director being able to feel good about himself. In other words, I don’t like Aronofsky’s style.
That said, Black Swan is an interesting film to watch. Between the music, the ballet performances, the more conventional acting performances and the good story, the result is definitely worth watching.
Technical assessment:
There is something about the look of the picture in Black Swan’s Blu-ray that I didn’t like. I suspect it could be something to do with the particular film or digital technology used to shoot the film with.
The sound of Black Swan deserves much applause. Its depiction of the music from Swan Lake, though interrupted by dialog and various sound effects, is simply great – probably the best reproduction of full scale classical orchestral music in a film, as far as I remember. Definitely worth watching/listening to via the Blu-ray format that offers the best possible sound reproduction there currently is.
Overall: Like the contrasting characters it depicts, Black Swan created mixed feelings with this reviewer. Still, it is a good film worthy of 3.5 out of 5 stars.
Posted by Moshe Reuveni at 10/26/2011 11:46:00 pm
Email ThisBlogThis!Share to TwitterShare to FacebookShare to Pinterest
Labels: Film