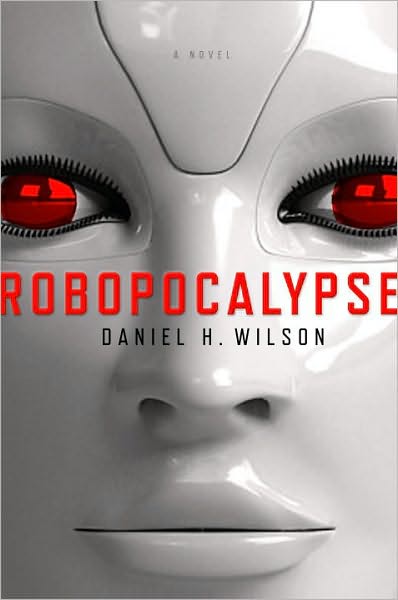 Lowdown: The story of the war between robots and humanity.

Review:
Taking place in the near future, Robocalypse is your classic science fiction book. That is, it's a book that tells a story of a potential and perhaps not too unlikely future, but even more than that a book that tells us something about our present day selves.
As Robocalypse starts we learn that there has been a war between humanity and its former robots. The war has been terribly bloody with most of humanity now gruesomely dead, but it was humans that ended up victors. One of those winning human soldiers takes it upon himself to tell us the story of the war, based upon recordings he had retrieved from the robots. The story is told in a rather unique way: we catch glimpses of the war through the eyes of a few heroes, both robot and human, who tell us of their personal experience. It is as if Robocalypse is a collection of short stories, only that later these short stories converge and we find ourselves coming back to meet characters we met a while ago. Earlier they were taken by surprise as their toasters attacked them, later they fight back.
As far as being a representative to the war sub-genre of science fiction (ala Old Man's War), which probably happens to be one of the better selling sub-genres there, Robocalypse does a pretty good job. It tells a good story in a good way that left me thrilled to know what’s coming up next despite the fact we already know who won. One can argue the story of a robot uprising is not that original – after all, isn’t that what the Terminator series (see here and here) is all about? However, let us not forget that the Terminator world never got to show us the computer uprising itself; we only caught glimpses of its aftermath. Robocalypse does offer the uprising’s details, and in a very convincing way.
Ultimately, though, Robocalypse is a book about humans. It’s a book that’s there to point out that humanity never gave any of its minorities or weaker demographics power without a good fight: in Robocalypse’s case, this is what the robots are fighting for in the first place. That good fight takes its toll on both sides, after which neither has a choice but to respect the other. Sadly, it is my opinion that Robocalypse is quite correct with this grim view of humanity.
Does that mean I foresee the war between humans and robots as inevitable? Is the future predicted in Robocalypse our future, too? I suspect Robocalypse’s future is a very possible one, especially as it is only a matter of time before artificial intelligence eclipses ours (it already has in chess and other less practical forms). However, I also foresee the future of humanity to be well integrated with that of artificial intelligence: instead of being potential rivals, I see the next main evolutionary step of humanity to be its physical convergence with technology. I doubt it would take too long for that to start in earnest.
Overall: I like well told apocalyptic tales, I like well told sci-fi war stories, and I like the debate on matters of technology as well as matters of humanity. I therefore give Robocalypse 4 out of 5 stars.
P.S. According to imdb, Steven Spielberg is going to direct Robocalypse's movie version. I wonder if its going to be as visceral in its violence as the book is; I doubt it.
Posted by Moshe Reuveni at 9/26/2011 11:13:00 pm
Email ThisBlogThis!Share to TwitterShare to FacebookShare to Pinterest
Labels: Book