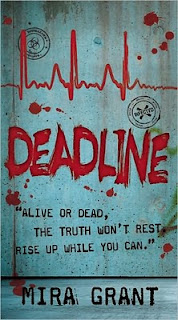 Lowdown: A gang of bloggers investigates a zombie conspiracy.
Review:
I quite liked Mira Grant’s Feed; it won my vote for this year’s best book Hugo award for a start if you ask me, it was the only worthwhile nominee). Better evidence for me liking it comes in the shape of me buying and [relatively] quickly reading its sequel, Deadline, even though Feed had a proper ending and didn’t scream out for a sequel.
Deadline takes off some months to a year after Feed finishes. The story is told in first person from the point of view of Shaun Mason, the master blogger whose sister Georgia told us the first person story of Feed. By now the presidential candidate they were blogging about in Feed has become president and Shaun has himself a new gang of fellow bloggers to replace those that turned into zombies at the end of Feed. Oh, didn’t you know? Feed and Deadline are post apocalyptic zombie science fiction books.
As the book starts, a visitor knocks on Shaun’s door. She carries a secret with her: it seems as if all humans carrying benign infections of the virus that turns people into zombies die prematurely of unnatural causes. Our team of bloggers quickly jumps at the queue to investigate matters and find the truth of the matter, but just as quickly find themselves being hunted down by elusive foes that stop at nothing to stop the truth from being exposed. Thus begins a saga that is pretty similar in nature to the saga described in Feed.
It’s very much the same story, only told from Shaun’s point of view instead: each quarter of the book tells us of another escapade in which the heroes venture into some zombie laden territory (and then get out). The exception is the middle bit, in which we have a long and thorough break during which Shaun has sex with a fellow blogger. And throughout it all, we have the voice of Georgia popping up in Shaun’s head. Just in case you haven’t caught my drift here: given that my main complaint against Feed was its tedious nature, that complaint is quadrupled in Deadline.
It’s actually worse. I could smell something fishy the second the “cloning” card was drawn at the book’s very beginning; usually, stories that have nothing to do with cloning and which draw this card do so in order to get out of a particularly tight corner they get themselves stuck in. That smell grew into a stench as my reading of the book progressed and I began to realize it would take something special for this book to be able to offer a satisfying ending. Then, at the very end, I realized I found myself in the middle of this gigantic dumpster: Deadline does not have an end; it has a weird and unexplained twist (of a rather fantastic nature) and it just stops.
It stops without giving us any explanations about absolutely anything concerning the conspiracy at hand. Virtually all Deadline does provide, given that lack of detail, is the story of 3-4 zombie encounters and a detailed sex scene. That is not what I am after when I read me a thick book.
Deadline is actually worse than that. Shaun is a bit fucked in the head, you see, since the time he had to do what he had to do to his sister (back in Feed). He constantly has to show us this nature of his, and thus he spends half the book banging his fists against walls, banging his fists against his colleagues, or talking to his inner sister’s voice. Sure, there is nothing wrong with having a mentally ill person as the hero of a book, but it sure is hard to identify with them. And it sure is annoying to read for the fiftieth time that their knuckles hurt from hitting the wall.
I was willing to live with it in order to see how things end up, but then again – things don’t end up with Deadline, do they?
Overall:
I may be behind the times. Maybe it is the contemporary formula to make a trilogy off everything, with the first part being a good all around book and the second being nothing but a tool to make you buy the third. Maybe.
I will not succumb to the formula, though. If someone sells me a book then that book has to stand up for itself; if they want to sell me a book that is meaningless without its sequel then they have to tell me very clearly about it in advance. Deadline didn’t, and therefore Deadline does not pass as a book by my standards.
I therefore see no choice but to grant Grant 0.5 out of 5 stars. Do not come close to this one unless you’re already in possession of its yet unpublished sequel!
Posted by Moshe Reuveni at 9/20/2011 11:19:00 pm
Email ThisBlogThis!Share to TwitterShare to FacebookShare to Pinterest
Labels: Book

that's even less than what you gave Blackout.

it's nice than you refer to Deadline as a thick book. I wonder what we'll call big books when there are no more paper editions.

I would say Deadline is worse than Blackout because reading it is similar to reading the middle part of a book (but just the middle part). Blackout is slightly better in that department.
Then there is the argument that Blackout does a decent job of making its reader feel in the middle of the blitz. In contrast, Deadline has decent post apocalyptic detailing.
As for its length, Deadline is some 8000 Kindle units long (whatever these units are).

I expected links in the books, after all they were plotted as a triology.

I totally respect other opinions, but I will state that there are trilogies and there are trilogies. For example, Scalzi's Old Man's War main trilogy is made of three self contained books; given that Feed was pretty much self contained I expected the same from its sequel.
However, note my problem is not only with the ending (or lack of) but also with my inability to find anything meaningful in Deadline. At least anything meaningful that wasn't already given to me by Feed earlier. I felt as if this book's only purpose was to get to the third and last book.

I felt some of the things that you did, but not quite as intensely. And I had other objections I didn't see here. But I agree completely about how much it was terrible to have to be in Shaun's head.

I noticed a lot of traffic on this blog recently. Google narrowed it down pretty quickly and I found Mira Grant has blogged about me and this review of mine.
It's here for you to look at:
http://seanan-mcguire.livejournal.com/392219.html

Just a few comments, especially if you've arrived here from Grant's blog:
1. I salute Grant for taking my review the way she did. I think she's 100% right in her attitude and the way she presents mine.
2. It is rather amusing to read some of the comments on her blog. Some are better than others, but regardless - it's an education. There's some good stuff going on there.
3. In case anyone thinks I have something against Grant, let the record show I really liked Feed and even voted for it as the best book in the Hugos. I was rather disappointed it didn't win.
4. Yes, the book that did win, Blackout, has a lot of explaining to do with my dislike of books that don't end.
5. Yes, having read Grant's explanation I do feel bad for writing this review of mine the way I did. Sometimes it's hard to remember there are hard working people behind the stuff I condemn so easily.

As Grant says, everyone is entitled to their opinion, and as long as they are to the point and do not represent some kind of trolling that's perfectly fine. I wouldn't want to live in a world where this is not the case.
Me, I had myself quite a lesson. Given I was privileged with the author's direct response I suspect I will not be able to resist Deadline's sequel once it's out.

Just be glad you didn't call her a [nice] criminal.

[The following is written in reference to http://reuvenim.blogspot.com/2011/09/everything-going-well-good-friend-of.html
You can blame Uri for referring to another post]

I suspected that criminal thing would come back to haunt me. To give it the right context, I suspect future generations will see us all as criminals for so thoughtlessly burning fossil fuel and ruining our descendants' climate.
My point is by closing our eyes when it comes to religion we let ourselves commit what we would otherwise refer to as atrocities.

A Question Of ITIL said...

I think I’ve waited long enough that Grant won’t read this and I won’t have a chance to offend her as well. Also, I’ve only just read it.

It’s probably a matter of expectations, as usual. I didn’t like Feed quite as much as you have, so I wasn’t disappointed with Deadline.

I agree that the book could have been shorter, and that it wasn’t as much fun listening to Shaun for an entire book. I also felt it was a lot of “more of the same”, but I enjoyed it in Feed and enjoyed it again here.

I don’t quite understand why you’re so annoyed with the unresolved nature of the book. You did know it was the second part and that there was a third one coming out. Sure, some middle books are more self-contained than others, but I’m not sure home much fun you’d have reading just Sign of the Unicorn, or The Hand of Oberon.

My main problem was that for me Feed stopped making sense when the big conspiracies started piling up near the end of the book, and I don’t have any better understanding of it after Deadline. Maybe it’ll all come together in the third part. Let’s just hope it will be the final one.

You probably put down my problem with the ending better than I did: it's not just the lack of an ending, it's to do with things not making sense at an expanding rate... and then the book finishes you off.
Regardless, I think I've addressed all of the above with my review of Blackout at http://r-views.blogspot.com.au/2012/06/blackout-by-mira-grant.html