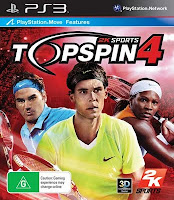 Lowdown: An elaborate tennis simulation for the PS3.
Review:
In a market flooded with variations on the tennis theme, a game needs to specialize in order to be able to stand for itself. The Wii tennis games worked on the use of the Wii Remote; others, like Virtua Tennis, tried to have an edge through arcade like mini games. Top Spin 4, one of the latest tennis video game releases, aspires to work as a simulation.
You can choose to play as one of twenty something famous tennis players, from my childhood hero Bjorn Borg to a modern Nadal. Oddly enough, women have only six famous names to choose from, and even those include names that have already faded from the public’s attention without leaving much of a mark (say, Safina and Ana Ivanovic). If you ask me, though, much greater fun is there to be had by creating your own character and grooming him/her up the ranks.
This career mode starts at January 2011 and has your player taking part in one training activity and one tournament a month. These gather the player skill points, which allow the player to go up in levels by specializing in different aspects of the game: you get to choose between improving your serve and volley, your defensive skills, or your mastery of backline court dominance. The better you get the more prestigious tournaments open their doors to you, thus getting the wheels of your career moving. Further specialization can be acquired through the appointment of coaches that work on improving specific skills.
Eventually, after significant loading time waitings (yes, in plural!), you get to the match itself. Player graphics is good but more than a bit weird, and – if you ask me – not on par with the quality you see in other PS3 sports games like FIFA. Players will start the match walking to the court with their tennis bags floating over their shoulders; as you watch their facial expressions you will notice that these humanoids are more than slightly freaky. You know how they say that a human like replica that is good but still imperfect can look scary? Well, if you don’t, Top Spin 4 will introduce you to the concept. It’s not just the players' graphics that are lacking, the crowd doesn’t do much better.
All my grips disappear the minute the ball is served. That is when Top Spin 4 shines, because that is when you notice you are not playing an arcade but rather a simulation that very much feels like the real deal. I noticed that at first when I asked to change the running direction of my player and felt how it takes time and effort. More interestingly, I really got to notice how my player’s preferred style has an effect on the game; further, I got to notice how my opponent’s style has an effect on my game. You can’t just apply the same strategy all the time, with each opponent requiring a different approach and the early stages of the match feeling more like playing in the dark as both you and the computer assess one another. Just like real life!
Things continue to feel real as the game develops. Unlike other console tennis games, playing a set number of tricks on your opponent won’t get you too far; your opponent will quickly adjust to specific patterns and repeated serves. Your opponent will also go through stages, producing a set of wonderful strikes but then going into bouts of easy point losses – till they recover. Just like real life!
With such potential for ecquisite gameplay at hand, you should not be surprised when I tell you of some epic battles my developing characters have had against the likes of Federer and Murray. As games draw out and you get into tie breaks you will notice your player getting tired and visibly sweaty (again, in a freakish kind of a way). Captions will inform you how long the game is lasting and provide other TV like statistics. It won't take long before you get will find yourself at a stage where you actually look forward to those small breaks between serves in order to be able to relax, take a breath, and think your strategy through to the next ball. Did I mention Top Spin 4 is very life like?
The PS3 version supports the PlayStation Move, which I wasn’t able to test. I wonder, though, whether the physical action would add or detract from what is otherwise the best tennis game/simulation I have has the pleasure of playing.
Overall: Top Spin 4 is exactly the type of game the PS3 excels at. It not only looks more real to watch than any other tennis game I tried before, it feels incredibly real to play. 4 out of 5 stars.
Posted by Moshe Reuveni at 8/02/2011 10:07:00 pm
Email ThisBlogThis!Share to TwitterShare to FacebookShare to Pinterest
Labels: Video Game