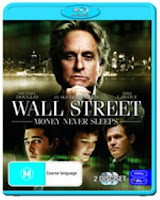 Lowdown: The GFC exposes farther immorality at Big Money.
Review:
If you thought director Oliver Stone was a man with a mission back in 1987, when he did the first Wall Street, you better wait till you watch 2010’s Wall Street: Money Never Sleeps. There you will see what a man with a lot of money on his hands and a reputation that allows him to get away with anything can do when he is on a mission.
Money Never Sleeps takes place in 2008, just as the GFC starts to unfold. Gordon Gekko (Michael Douglas), the first Wall Street’s villain, is out of jail and embarking on a book authorship career through a book warning society of the perils of speculation and putting too many eggs in hedge funds. You know, the stuff that brought us the GFC. In parallel we meet Jake (Shia LaBeouf doing the first film Charlie Sheen role’s equivalent), a young and promising Wall Street insider with ideals on his side: his passion is for this fusion energy research company that could rid us of our addiction to fossil fuels. His passion is also for Winnie (Carey Mulligan), who happens to be Gekko’s estranged daughter.
Take this “love triangle”, stir in a powerful banker in whose dictionary the word ethics does not exist (Josh Brolin), and shake it all the tune of the unfolding GFC, and you get the drift of Wall Street: Money Never Sleeps. That is, you will witness a film where the interaction between characters unfolds in a rather unconvincing manner. A film where characters are introduced in all sorts of weird ways, like Jake’s apartment being more like an office with diagrams and wind turbine models to tell us what he’s like (why would an investor have a wind turbine model at home?). What I am trying to say here is that Oliver Stone, the man with the mission to tell us just how bad extreme capitalism can be, just tries too hard.
Trying too hard leads Money Never Sleeps into the realm of films that are way too long, progress too much to the tune of events outside the viewer’s realm of awareness, and contains hero characters who – at the end of the film – are just as much of a riddle as they were at the start. The use of the occasional uncharacteristically fast pan of the camera or the sudden zoom attracts too much attention to the director himself (Stone does have a cameo or two in there, too). Even the soundtrack by David Byrne and Brian Eno is eccentric, although in a positive way; I suspect this is a soundtrack that will stand the test of time.
But you know what? I still enjoyed Money Never Sleeps, even if it was a bit boring and even if too much of it was carbon copying from the first film. I enjoyed the whole thing for a couple of reasons: Michael Douglas is an excellent actor (and I wish him all the best in his dealings with cancer); and besides, I totally agree with the core message that Stone is trying so hard to push. I am no fan of capitalism, and like Stone I despise its extreme manifestations. That aside, I can't say I can detect anything being done to prevent the next GFC from taking place.
Interesting scene: With all the scandals he’s been through, it was funny to see Charlie Sheen’s cameo.
Interesting haircut: Gekko and his switch of a hairdo to Wall Street style, featuring pulled back hair and a lot of jelly.
Worst scene: The motorcycle racing scene between Jake and the baddie banker was one of the silliest things in film ever. What did that have to do with anything?
Best scene: I enjoyed the aerial tour of downtown Manhattan at the film’s opening credits scene. It truly demonstrated just how much power lies in this area. A comparison with the Melbourne CBD views from my own office window reveals just how much power is concentrated in that relatively small area of New York.
Technical assessment: The picture on this Blu-ray is quite horrible, with inconsistent colors and poor detail in too many scenes. I suspect Stone was trying to make an artistic statement, but I would say he failed. That said, the sound is not bad and the supplementals are pretty good at explaining where the director came from - much better than the film itself, actually.
Overall: Tries too hard, but at least it does so with intentions. 3 out of 5 stars.
Posted by Moshe Reuveni at 7/25/2011 08:15:00 pm
Email ThisBlogThis!Share to TwitterShare to FacebookShare to Pinterest
Labels: Film