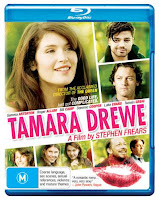 Lowdown: A peaceful English village turns chaotic upon the return of a now sexy female.
Review:
It was a hard day's night and we were seeking a peaceful and easy film to relax with. A quiet drama with some comedy elements that won't insult our intelligence. We were seeking a quiet British film. We were seeking Tamara Drewe, or so we thought.
Taking place at a quiet English village, Tamara Drewe pivots around a resort of writers seeking peace, quiet and disconnection from the rest of the world to stimulate their muse. There they are catered for by a D list womanizing writer, his loyal wife on whom the whole operation seems to depend, and a young muscly assistant. Into this peaceful yet twisted setting returns Tamara Drewe (Gemma Arterton, recently seen in Prince of Persia): a former resident who everyone knew as the young ugly duckling, due to her huge nose, is back from London. Without her nose, left at the plastic surgeon, and with a promising career as a writer this sexy woman turns heads wherever she goes. Suddenly, every man in the area is interested in Tamara; celebrities not from the area (represented by Dominic Cooper) are also in the running. Events, however, seem to be dictated by the whim of two bored teenage girls rather than any of the adults. Chaos ensues.
You sort of know what to expect from a film such as Tamara Drewe: A Jane Austen like drama, dry British humor and sex-appeal. You get it, but things don't work as well as they should for such a simple formula that on paper should have resulted in easily delivered viewer's satisfaction. I felt as though the film lacks a sense of direction, with Tamara straying from one option to another. Mostly, I felt like this hour and three quarters long film should have been at least half an hour shorter, because what we have on our hands here is a generally boring film.
Best scene: Tamara causes some severe palpitations with the local population as she shows herself to the whole village for the first time wearing some very short pants and maneuvering herself like a model on the catwalk. More than the scene itself, I liked the supplementary showing how this scene was shot: a seemingly simple walk across a grassy path takes a lot of effort to shoot!
Technical assessment: A nice Blu-ray all around. The sound was far from knocking me off my sofa, but its easy transparent nature does suit the quiet village atmosphere.
Overall: If you thought this Austen like formula could never go wrong then here's an example where the film runs on the wrong gear. 2.5 out of 5 stars.
Posted by Moshe Reuveni at 7/13/2011 10:46:00 pm
Email ThisBlogThis!Share to TwitterShare to FacebookShare to Pinterest
Labels: Film

By most beautiful women; I mean those that go beyond fad-beautiful, those that not only stand the test of time, but those whom just about all can agree are beautiful. Audrey Hepburn, Grace Kelly, Audrey Tautau, Maria Callas, Lauren Bacall to name a few.