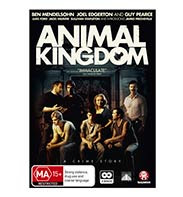 Lowdown: An innocent Melbourne teen suffers for being a member of a criminal family.
Review:
The question of how much seeing a depiction of one's home town on the cinema screen affects one's appreciation of a film did pop into my mind as I viewed and then reviewed Animal Kingdom. As objective as I can be, a film taking place on the same streets I live my life at is automatically much more effective than a film taking place at some arbitrary American city I’m unlikely to ever visit.
Watching Animal Kingdom’s Melboune may lead you to regard the city as a high crime location. We follow a teen, Joshua or J (James Frecheville) whose mother dies of an overdose just as the film starts. J goes to live with his grandmother and some of his uncles. That environment is not a healthy one to grow up in, with the uncles being criminals of various magnitudes, some time bordering on mental illness. Overlooking them all is the grandmother, who is not a criminal herself but certainly seems to enjoy the outputs of her children’s work.
The plot has us following the collision course between our gang of criminals and the police (represented, amongst others, by Guy Pearce). Through the eyes of J we witness the demise of the criminals, the corruption on the police’s side, and the effect this charade has on innocent bystanders like J and his girlfriend. There are thrills, there is some action, and there is a good human centric story at the core.
I did have a couple of reservations about Animal Kingdom, though. The first is to do with some inconsistencies: at the beginning of the film, the most wanted of the uncles – Pope – is so wanted the police is running twenty four hours stakeouts on grandmother’s house. Then, all of a sudden and in an unexplained manner, Pope is back home, the police don’t mind it, and things are as if Pope was never wanted by anyone. Strange.
My second gripe is to do with authenticity. Animal Kingdom has our criminals kill two policemen in a cold blooded shooting. However, throughout my time in Melbourne I don’t recall a single policeman killed, especially in such an evil manner (this manner that probably gives the film its name is one you won't forget once it hit the news). I realize Animal Kingdom is a work of fiction, but it doesn’t fit the scene in which it is set. Yes, Australians have a love affair with criminals – check out the emotions that one Ned Kelly stirs and the way he is regarded as a hero. The reality, though, is that Australia is generally lacking the shoot to kill life of crime attitude that we got used to seeing on American material.
Best scene: One of the uncles, a guy that would not hesitate to use his gun in anger, gives J a lesson in hand washing following a visit to the toilet after which the latter does a quick and dirty botch job.
Technical assessment: An average DVD in both picture and sound. I should have rented the Blu-ray instead, because this one is not a bad one at all.
Overall: A good films with a couple of issues that stands somewhere along the 3 to 3.5 stars out of 5 continuum.
Posted by Moshe Reuveni at 7/20/2011 09:39:00 pm
Email ThisBlogThis!Share to TwitterShare to FacebookShare to Pinterest
Labels: Film