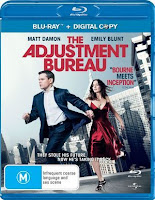 Well, I guess I'll have to see it. I avoided it because it was made out to be a film with religious overtones in the Christian circles I'm familiar with. Guess I should give it a chance!

For the record, Lord of the Rings has religious motifs and I still think it's a great trilogy...
I just have a soft belly for science fiction and fantasy.

So, we saw it...unfortunately I didn't think as highly of it as you did. I agree about the acting and the chemistry, but for me that was all the movie had to offer. The idea of the adjustment bureau was kind of interesting, but didn't really intrigue me very much. And I thought the bureau men themselves weren't anything special. They felt, to me, like a poorer, cheaper version of the agents from The Matrix.

To each his/her own! Glad you enjoyed it.

True. I'm still amazed at the fact someone spent hours of their lives doing something simply because I recommended it here. Hope you didn't want to kill me for wasting your time...
For the record, I do have a soft spot for science fiction, and I also have a soft spot for discussions on the matter of the illusion of free will. The latter is to do with the predominant approach our culture has towards free will, which is quite in contrast to what science tells us. I am waiting for the day a brave legislator would open the Pandora box by asking whether the accused can be charged with anything given the accused does not really have free will?
Anyway. There are a lot of similarities with Matrix, but I see two main differences: there are no action scenes (in the sense of shooting), and there are no obvious special effects. This makes the film more of a philosophical discussion than the boys with toys attitude of Matrix.