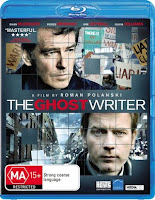 Lowdown: A ghost writer for the former British PM learns there is a lot hidden in the guy’s past.
Review:
If you want The Ghost Writer summed up in one sentence, this would be it: “Roman Polanski does Alfred Hitchcock”. If you want more, keep reading.
The Ghost Writer follows a ghost writer (that’s the way people refer to Ewan McGregor character in the film) who gets the unlikely job of helping the former British PM write his autobiography. There are some catches, though: that former PM (Pierce Brosnan) is obviously modelled after Tony Blair, and like good old Tony he is being accused of unethical deeds while holding his top job (unlike Tony, though, he did not have a Catholic epiphany upon quitting). He’s actually residing in the USA, which fits the occasion given it is his pro American policies that gave him his bad reputation. Oh, and there’s another catch: our Ghost is there to finish a job started by another ghost writer; that original ghost writer was found dead at the beach and presumed to have committed suicide. Or so they say, you never know in these films.
Thus our Ghost arrives at the former PM’s lonesome island fort to find a dysfunctional household where the wife (Olivia Williams) and the secretary (Kim Cattrall) seem to be competing for more than the former PM’s attention in between the whole security and household maintenance charades. As the plot thickens, our Ghost of a hero learns more about this household that he’s in. He also learns about the person he’s meant to cover. This almost tragic process of revelations turns Ghost into your classic Hitchcock hero (ala those from Vertigo or The Man Who Knew Too Much).
Recollections of Hitchcock are no coincidence: Polanski directs this film with such exceptional skill half the fun of viewing it comes from the masterful presentation. On the other hand, The Ghost Writer does suffer from mild pacing issues that render it mildly boring in the middle, but overall this is a film that makes its statement out loud. It’s a film that protests the anti transparency culture dominating the world of politics, where the laymen do not stand a chance knowing what really drives their leaders to make the decisions they do. In particular, as per The Ghost Writer’s case, when these decisions have significant consequences – like going to war.
While at it I will note it is funny to watch a film that virtually takes America’s role in the world to be a villainous one for granted. I don’t know whether this is the result of Polanski trying to avenge his exile, and I don’t know whether this trait is only noticeable because the majority of film releases – being American – would not dare take such a stand. It's definitely noticeable, though.
Best scenes:
The film’s ending offers two scenes that are poetry in motion picture art. The first has a key paper note passed from person to person inside a crowded room: other than the starting point and the end point we do not see who is transferring the note to who, we just see the hands transferring the note from one person to the other. Given we do not know what is in the note, what better technique can the director utilize to inform us how important this note is and make us anxious in anticipation as we wait to learn what it says?
Second we have the very ending, where the action takes place off camera. We know what happens because of the sound and resulting events, but we cannot see what actually took place. Given The Ghost Writer is a film devoted to the things we do not see taking place and claims these have more importance than the things we do see, what better ending can such a film has?
Technical assessment:
First of all, it has to be said this is a quite poor Blu-ray presentation. The picture is not that bad, but it reveals many poorer production values such as over reliance on blue screen filming. Sound is not used as often as it should to enhance the viewing experience; you could have fooled me if you told me this was not a surround sound presentation.
It was also interesting to see how swear words were handled. You would hear the characters say one swear word but then see the subtitles report another instead. It seemed inconsistent, too, as there were still harsh words thrown about from time to time while on other occasions the harsher words were obviously dubbed over. In some parts of the film this was so frequent as to render the experience into a comedy. A pathetic attempt to reduce the film's rating in some countries?
Overall: This very well crafted Hitchcock replica makes it to the 3.5 out of 5 stars realm.
Posted by Moshe Reuveni at 6/22/2011 09:37:00 pm
Email ThisBlogThis!Share to TwitterShare to FacebookShare to Pinterest
Labels: Film

Exchange link : Patrick here from the SW-Box blog (blog.sw-box.com). Just wondering if you would like to exchange blogroll links with me. If yes, please leave me a comment on one of my recent blog posts. Then I'll link to you first. When you have a free moment, just link back ok? If you're not interested, that's cool too. In which case, happy blogging and have a great day.