The Book of Rachael by Leslie Cannold 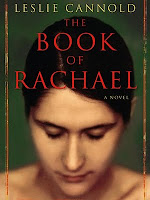 Lowdown: The story of Jesus’ forgotten sister, Rachael.
Review:
A quick look at the books I normally read reveals my forte is with popular science, philosophy and science fiction. However, from time to time I like to stray into foreign fields to see what things are like outside my realm/comfort zone. The Book of Rachael is one such case, chosen specifically because it’s author – Leslie Cannold – easily wins my vote for best person on Twitter (as discussed at length here).
Cannold has won a lot of her fame with the public as a result of her feminist agenda, and The Book of Rachael mirrors the opinions she holds with much vigour. The story is told in first person from the mouth of Rachael, who happens to be the sister of Joshua (that guy who most of the world recognizes today as Jesus). Life in Israel at around the year 0 was tough, but it was even tougher for the females of our species given that at the time (and up until not that long ago) they were regarded more as their males’ property than as independent human beings.
We meet our Rachael as a girl still naïve in the ways of this world. Being exceptionally smart, our Rachael starts bumping into the walls of a society that wouldn’t recognize her for the talented person she is. Indeed, it doesn’t take long before her mother subdues her little child to a life of mopping floors. Yet things happen in Rachael's life; history happens. Her older sister is raped and then forced to marry the offender; Rachael has an appetite for learning despite the ban on women studying; she falls in love with a man (Judah, aka Judas); and then there’s the whole story with her brother Joshua. Carefully woven in between are all the narratives we read about from Cannold in her previous incarnation as a non fiction opinion article writer, like rape, abortion, and the right for women to have equal opportunities.
It’s hard for me to say it because of all the appreciation I hold for Cannold, but I had some hard times with The Book of Rachael. For the first half of the book I was not able to find myself identifying with the hero character to a level that would allow me to enjoy my reading; I felt like I’m reading as a favour to a person I greatly respect. Then there's the fact we know the story's end: we know how Joshua ended up, and we know that women did not win recognition of their humanity till way later than biblical times.

This impression of mine is in contrast to all of the book reviews I read elsewhere and to that of my wife’s, with whom I generally share fairly similar tastes: I can therefore only conclude the problem has to do with me being a male and thus less responsive to the issues affecting women. It is perfectly natural for me not to be able to identify to issues I never face, yet I will maintain that the perfect book should have been better at subduing this visitor into its world.
It is in the latter half of the book, where most of the “action” is packed, that I started properly enjoying myself. The Book of Rachael did grow on me, eventually. It felt like a war of attrition I was happy to lose: through its detailed and accurate descriptions of life at ancient Israel, in particular female life, this complex model of a world was created in my head. The Windup Girl, the 2010 Hugo and Nebula winner, achieved the same feat: it wasn’t the greatest story ever told, but it created such a strong impression of Bangkok in my head that it left more of a mark there than most other books, including books I had enjoyed much more. It is an undeniable pleasure to have such a detailed world created for me by any author, and in Rachael's particular case testimony to the long hours of research Cannold must have invested in writing this book. I can only hope she gets her return on investment for the effort, yet ours is a world that tends not to sympathize with depth.
While authenticity is great, it is interesting to note the fine lines where authenticity was broken in favour of popularity. Character names are a good indicator: Cannold opted not to refer to Jesus as Jesus, the name that is currently popular not because of its authenticity but due to the way the New Testament was translated to Greek before it was translated to other languages. Instead, she called the character Joshua. Yet Joshua is not the authentic name either: it is very likely that if he existed in the first place, Jesus would have been known to his mother as Yehoshua or Yeshua. Joshua is just the common direct English translation of these Hebrew names.
The story of Joshua/Jesus does come into focus in the further parts of The Book of Rachael. Cannold provides her own take on this story, which unlike the more popular one does not involve the supernatural and is perfectly plausible. Its characters are much better defined and explored: for example, you can clearly understand the entire Judah/Judas subplot and its tragedy. If anything, Cannold’s take will probably offend those who hold their faiths dearly with its depictions of the very mortal nature of Joshua and, more to the center of the book’s heart, his mother.
I would not call Cannold’s version disrespectful, though. I think it vastly superior, stronger, and offering much more to learn from. Instead of the thirst for blood that is at the core of the common explanation for Jesus dying for our sins, Cannold’s Jesus dies to honor the weaker of humans, most notably women. As reasons for self sacrifice are concerned, I would prefer Cannold’s every time.
Cannold uses the Jesus story to clearly demonstrate how a society that marginalizes its weaker participants suffers for this marginalization as a whole. That's a classic Cannold theme. I, however, reserve the right to regard The Life of Brian to still be the most accurate depiction of those ancient time’s events.
Overall: Rich, and ultimately quite rewarding. 3.5 out of 5 stars.
Posted by Moshe Reuveni at 6/05/2011 09:30:00 pm
Email ThisBlogThis!Share to TwitterShare to FacebookShare to Pinterest
Labels: Book