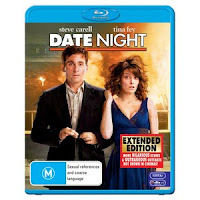 Lowdown: A parents’ night out turns into a nightmare.
Review:
By now we take it for granted that most mainstream Hollywood releases are aimed at younger audiences. It appears the marketing departments consider these to be the best grossing ones. When a mainstream release strays from the formula this appears odd, as is the case of Date Night: a comedy that most people can watch and enjoy, but which is obviously aimed at the middle-aged part of the mainstream.
On the face of it, Date Night is an ordinary action comedy (with much more emphasis on the comedy). Steve Carell and Tina Fey are middle aged parents, cracked between the pressures of their careers, parenthood and running a household. All that pressure makes their lives pretty mundane and predictably boring. When they learn that friends of theirs with seemingly more exciting lives decide to split up because they realized that original passion is gone they decide to “dare” a night out in the big city. The New Jersey couple books the babysitter and tries for the coolest restaurant at Manhattan. Predictably, there is no room for them there; but when someone calls for the Tripplehorns to come to their table and no one answers, they assume the role of the Tripplehorns. At first they enjoy dinner, but then – as can be expected for a comedy such as this – their identity theft leads them on a night to remember. Between various criminals, police and secret agents (Mark Wahlberg), the couple’s ordinary lives become extraordinary – if only for a night.
I cannot say I like Carell’s exaggerated style much, but I did like Date Night a lot. I liked it primarily because of its accurate depiction of what life really is like for a middle aged parent: the pressures of having to balance home and work, the demanding children who are totally indifferent to the efforts you’re making, the total annihilation of sexual drive, the lack of sleep, the feeling that's always there of not being a good enough parent because you have to deal with everything else in life. It’s all there, in a manner very different to the sweet way parenthood is normally sold to us. And I like it: I like watching a film whose characters are in the same shit I am. Not superheroes, not celebrities: just ordinary people trying to make ends meet.
Sure, there is comedy in the film, too. We’ve seen it all many times before; it’s alright, I guess. I didn’t care much for it, though. I was held captive by a film that puts on the agenda the troubling fact that when you're a middle-aged parent your life becomes like a small time business and your family are usually stakeholders in that business.
Best scene: The film starts. We see a little boy and a little girl viciously jump on their obviously tired parents’ bed, waking them up with much anguish. The camera pans over and we see the time on the alarm clock: 5:00am. So true!
Technical assessment: Given that a lot of Date Night takes place at night this one must have been a tough shoot; it shows on the Blu-ray with some inconsistencies and too few details in the darker side for my liking. The sound is average for such a mainstream release.
Overall: An ordinary film that managed to be quite special by its realistic and unashamed look at how parenthood ruins the life of us. 3.5 out of 5 stars. How nice it is to see Hollywood daring to go where it usually doesn't!
Posted by Moshe Reuveni at 5/09/2011 10:49:00 pm
Email ThisBlogThis!Share to TwitterShare to FacebookShare to Pinterest
Labels: Film