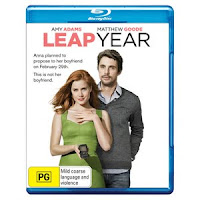 Lowdown: An American woman’s adventures in Ireland, where tradition allows her to propose to her would be husband.
Review:
I like Amy Adams; this blog knows I do. Which allows me to ask the following question: what the hell did Adams think when she decided to star in a film as bad a Leap Year?
We are not talking about an ordinarily bad film here. We’re talking about a horrifically bad one, a film that acts as the best example for all that is bad with mainstream American cinema: predictable, laden with clichés, and oozing with conservative agendas that would make a young earth creationist look like a progressive thinker.
Adams stars as an American real estate industry specialist (read: someone who does not perform in a productive capacity). She’s dating this cardiologist who is obviously as charming as used toilet paper and together they’re buying this dream apartment and everything. One day she thinks he’s going to propose to her because she heard he walked into a jewellery shop, but then it turns out he only bought her earrings. Then the guy's off to a conference in Ireland; Adams thinks for a change and decides she wants to marry him. Her plan is to follow him to Ireland and propose to him on 29 February, a date when – according to Irish tradition – women can propose.
The weather disagrees with Adams, who ends up having to travel in all sorts of awkward ways to reach her destination (Dublin). To her aid, but not particularly wilfully, comes another guy – a barkeeper desperate for money to keep his Irish pub. The unlikely two venture together, and although they start off hating each other’s guts you won’t earn two points by guessing where this will lead to as they take part in what seems to be a rather too lengthy Ireland tourism ad.
Where should I start accounting for Leap Year’s woes? Should it be with the artificial performance from Adams that has to qualify as one of the worst demonstrations of acting ever stamped on a Blu-ray disc? With the collection of plot twists that simply don’t make sense?
No, I’ll settle with discussing the film’s preaching of certain social values that take feminism back a millennia or two. I mean, the whole affair is based on the “fact” that women can’t propose to their men. But let’s look at an matter critical to this film: the engagement ring. As in, the diamond ring.
Obviously, most people are unaware of the history of diamonds’ marketing. The shorter version of the story goes like this: When diamonds were first discovered and identified as a limited resource by this company called De Beers, the company decided to monopolize them. It then (early 20th century) embarked on an advertising campaign to train people to regard diamonds as precious while it controlled their availability in order to make them an expensive commodity. That is all there is to it; diamond cravings are a totally artificial and recent notion, perhaps demonstrating human fallacy better than everything else.
The problem with Leap Year, therefore, is that it takes the diamond fallacy, combines it with others, and builds a tower on top.
Best scene: Adams comes back from Ireland to her flashy new apartment and sees it and its housewarming guests for what they are – a status symbol for status anxious people. That’s a notion I can identify with (as per the example here).
Worst scene: Pretty much every other scene in this film, a film that’s meant to be a comedy but is actively painful to watch.
Overall: Avoid this one like the plague. 1 out of 5 stars.
Posted by Moshe Reuveni at 4/11/2011 10:10:00 pm
Email ThisBlogThis!Share to TwitterShare to FacebookShare to Pinterest
Labels: Film