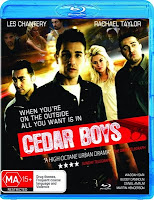 Lowdown: Young Lebanese/Western Sydneysiders get too deep in crime.
Review:
Cedar Boys is a recent Australian production that received quite a lot of good feedback (relative to its production size), and rightly so. It tells a genuine Australian story, one that reflects into the country’s fabric of being.
Our story starts at Sydney’s poorer western suburbs, where there is a high concentration of migrant families, many amongst which come from Lebanese backgrounds. Our hero is one such guy, young Tareq (Les Chantery) who works as a panel beater. His work is the story of his life: a dead end job during the day while at night when he goes out to town he can’t get into the clubs that the Anglos visit; when he tries to mingle with them they won’t accept him.
Tareq decides to dare dream when he sees the gorgeous Rachael Taylor while cruising the streets with his friends in their pimp car. He unexpectedly succeeds and makes contact, enough to win him subsequent dates. However, it is unclear whether Taylor’s character wants him for who he is or for the drugs he can supply through his contacts.
In parallel, Tareq’s friend Nabil (Buddy Dannoun) stumbles – through his job as a cleaner – on a large stash of drugs. Together, the two start dreaming of a potential escape from their prospect-less lives: the drugs and the money that comes with them may earn them a ticket into girls, the richer suburbs and general social acceptance in a society where success is mostly measured by money.
Cedar Boys is pretty solid from start to finish. It features easy to identify with characters in believable scenarios, and it depicts the conflicts they have to face fairly well. As in, just a week ago ABC’s Hungry Beast ran a story about Aussie teens of Asian ancestry going through plastic eye surgery to make them look more Anglo and earn them their acceptance. Indeed, the problem faced by minor authenticities in the supposedly multicultural Australian society (but ever not so, if you ask me) are there and they are severe. So severe that people will go to great lengths to gain acceptance.
Not only does Cedar Boys deal with an issue that is fundamental to contemporary Aussie society, it also covers it very well. It depicts the collision of old traditions with the modern aspirations of the young boys (for whom the peak of existence is represented through new rims for their car) and it touches, if ever so slightly, on frictions between different social groups through its take on the Arab-Israeli conflict. This is no superficial effort.
Style wise, Cedar Boys feels more like a documentary than a fiction. No doubt this is done on purpose in order to boost authenticity, but it does introduce some rough edges. Take the lack of a musical soundtrack, for example: we only hear music when the characters do, like when they’re at a club; the rest of the time we’re mostly quiet, and I couldn’t help noticing how the lack of music takes me off guard and causes the film to lose its grip on me until its next intense scene.
Best scene: Dreams start to shutter when Tareq discovers Rachael Taylor character's secret. As in, what is it all for?
Technical assessment: The picture on this Blu-ray is not much better than a DVD’s, but that is probably the result of poorer production values. The sound, too, will not shock your foundations. Still, more than a decent effort for a production this size; the mere fact I was watching a Blu-ray and not a DVD says something good about Cedar Boys.
Overall: A solid film that is definitely worth watching. 3 out of 5 stars.
Posted by Moshe Reuveni at 4/12/2011 10:58:00 pm
Email ThisBlogThis!Share to TwitterShare to FacebookShare to Pinterest
Labels: Film