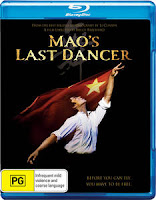 Lowdown: A Chinese child from an impoverished childhood grows to become a ballet dancer and see the other side of the world.
Review:
Aussie director Bruce Beresford gave us films like Puberty Blues on one side and Driving Miss Daisy on the other. In Mao's Last Dancer he opens up another gateway to a new side of the world, the one leading to China.
We follow a Chinese called Li Cunxin, a real life character who grew up in Maoist China, a time in which China was famous for its population's use of bicycles. Living in a poor family at a poor village where he's known as "the sixth child", our Li hits the jackpot one day when party officials visiting his school choose him from millions of other children for selective special government programs. There he's taught how to become a ballet dancer in the hope of advancing the cause of communist China, but amongst the soulless environment there he shines as the only dancer who really digs ballet. Indeed, he stands out so much that when an American ballet producer sees him in action he decides to bring him over to the USA for a three month stint.
Li's life changes upon landing in the land where too much is not enough: the affluence, the opportunities to develop professionally, the women... Against the advice of the local Chinese consulate they all get the better of him.
Mao's Last Dancer is an Australian production about the real life story of Li, who now calls Australia home. The story is inspiring, it's touching, but it's also nothing we haven't seen plenty of times before. We've seen plenty of stuff dealing with Russian defectors to the west, from the story of Mikhail Baryshnikov to Robin Williams' Moscow on the Hudson; the only difference between those and Mao's Last Dancer are not even the ballet but rather the replacement of the villains from the USSR with those from China.
Indeed, the main impression Mao's Last Dancer left in my head was one of severe anti Chinese sentiments. In the age where Russia is no longer a menace but China is threatening the USA's hegemony over the world you can see why a film like Mao's Last Dancer would be made, but personally I was reaching for the barf bag every time the film tried to tell me how bad China is and how perfect the USA is. Not that I disagree with that; even today, when more Chinese are better off than they were for a long while, it is obvious to me that I would love to live in the USA but hate to do the same in China. The point goes without saying; why is it, then, that Mao's Last Dancer pushes that point again and again (and again)? It severely errs on the side of patting our own backs, to the point of taking the good flavor out of the human story.
Besides, I'm pretty sure Bradley Manning will have a thing or two to say concerning freedom in America.
Notable scene: Li tells his American patron that someone called him a "chink" and asks for the meaning of the phrase. The scene is notable for being virtually the only negative thing Mao's Last Dancer has to say about the USA and the American lifestyle.
Technical assessment: This Blu-ray is closer to DVD technical standards than it is to its peers.
Overall: A nice story told badly. 2.5 out of 5 stars.
Posted by Moshe Reuveni at 3/23/2011 10:29:00 pm
Email ThisBlogThis!Share to TwitterShare to FacebookShare to Pinterest
Labels: Film